To follow up on the brandied cherries I made a couple months ago, I recently made cherry-infused vodka and bourbon.

I made these in one-pint mason jars, starting with a handful of cherries for each jar. After washing the cherries well, I sliced them in half and removed the pits. Put them in the jar and fill with your base spirit. I used Stoli and Maker’s Mark for these. Higher-proof spirits will extract more flavor from the fruit, and just as you want to use good, fresh fruit, you should also avoid low-quality spirits. 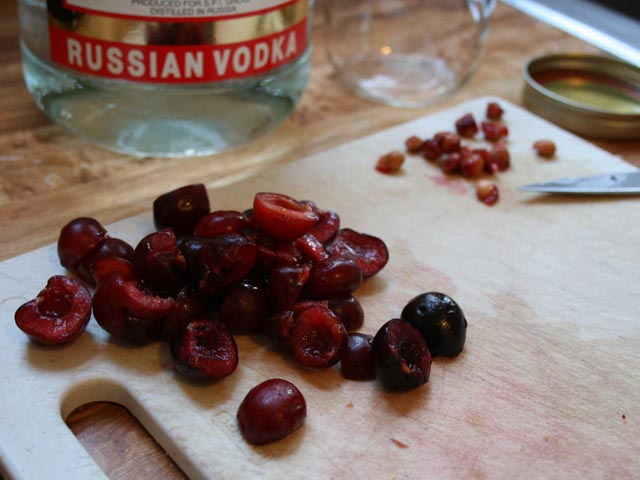 You can use frozen cherries to make these out-of-season but for best results make them in the summertime with fresh cherries. To add some bitterness to the flavor, partially crush the pits and include them in the jar with the cherries. 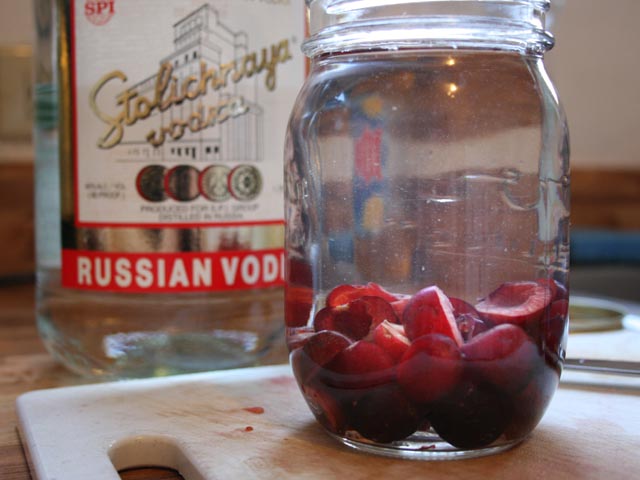 Give the jars a good shake a couple times every day and taste them daily after the first couple days. Particularly when including the pits, you’ll want to keep a close watch on the flavor as it progresses. Gary Regan says that many infusions will be pretty much finished after two to five days and that most will be finished after seven, that it’s unlikely that any more flavor will be extracted after that point.

Once you decide the infusion is ready, strain the liquid to remove the fruit, then pour back into the jar for storage. If you’re using spices or herbs — something that will leave fine particles in the liquid — strain through a cheesecloth or fine-mesh tea strainer. For these cherries, a regular mesh strainer was fine. 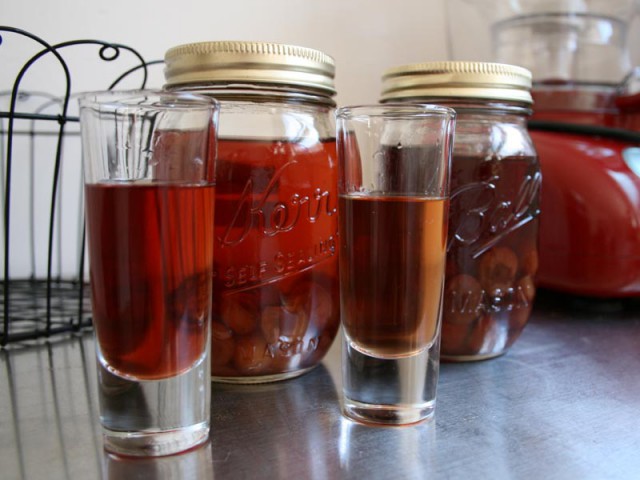 You can see the finished product above, vodka on the left, bourbon on the right.

The bourbon was the big winner here. It was a little too sweet for Manhattans and we found it best served on its own with ice. In addition to the sweetness, the cherries gave it a great fruity flavor, but not enough to be overpowering. It makes a good Old Fashioned too if you omit the fruit in the recipe. Try the vodka in a martini or with club soda, or use it in place of store-bought flavored vodka in other cocktails; it’s not as sweet as the store-bought varieties and has a more natural cherry flavor.

Liven up your cocktails with brandied cherries

I do this exact recipe with a few additions that add a little depth of flavor. A couple drop of almond extract, a few dashes of bitters, and a liberal amount of smoke from a hickory chip… (be very careful getting the smoke into the jar, it is flammable after all.) Seal the jar before the smoke escapes and taste after 5 days.

When the infusion is finished remove the cherries and throw them into a heated pot and sear the cherries, cooking away the vodka. Throw in a few extra pitted cherries that haven’t been in the infusion as well. Add 1/4 cup of red wine, let cook 2 min. Add 3/4 cup water and 2 cup sugar. Reduce to a simple syrup, stirring constantly. Strain.

loved finding this recipe! perfect to make for my son since he loves cherry anything! i was wondering… is there something that can be done with the cherries after you take them out of the bourbon? i’d hate to waste them if they can be used another way. any suggestions would be most welcome!