Fernet-Branca is an interesting liqueur. I’ve been intrigued by it for a while, ever since reading The Myth of Fernet on the SF Weekly web site. I generally try not to buy large bottles of things I’m not familiar with until I’ve tried them and am sure I’m going to use it — my liquor cabinet simply isn’t large enough to handle that kind of experimentation — and airline bottles are perfect for trying things like this out, if you can find a store with a good selection of them. I recently found a small bottle of Fernet and was finally able to try it. 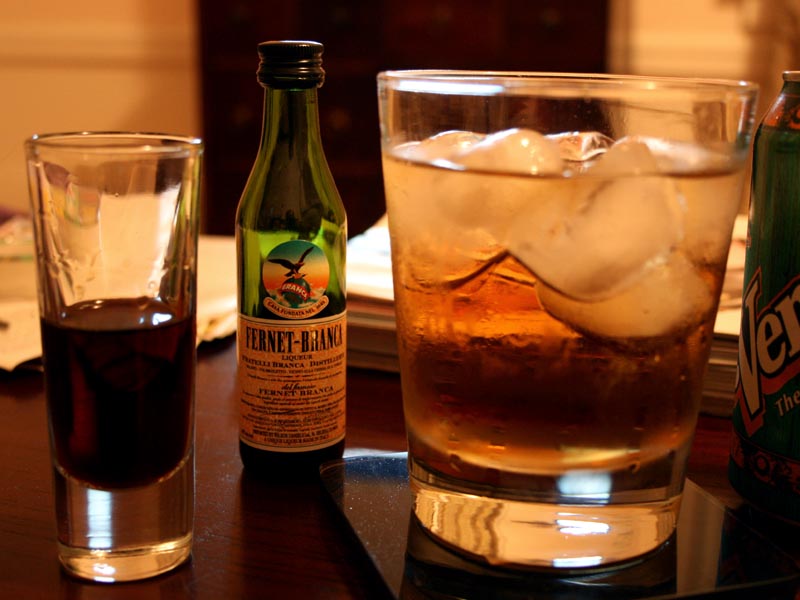 The SF Weekly article has a few choice quotes about the taste of Fernet-Branca, as experienced by first-time drinkers:

As a bitter Italian aperitif of more than 40 herbs and spices, it most often gets compared to Campari and Jägermeister, though by measure of accuracy, it’s equally similar to Robitussin or Pennzoil.

If you can imagine getting punched squarely in the nose while sucking on a mentholated cough drop, you’ll have an idea of Fernet-Branca’s indelicate first impressions.

I thought I was going to die the first time I tasted it.

That last one is from Antoinette Cattani, who is now the west coast marketing manager for the company that makes it, illustrating that a taste for it can be acquired even by those whose first impressions weren’t so good.

As for myself, trying it for the first time the other day, I actually quite liked it. Reading quotes like that prepared me for the worst, but as bitter herbal liqueurs go this is actually pretty mild compared to something like Campari. Sarai liked it too. She generally prefers the herbal side of the spectrum, such as Chartreuse, over bitters like Campari.

There seem to be two major centers of Fernet-Branca popularity. The first is Argentina, where it’s basically the unofficial national drink, and San Francisco, who drinks 50% of the Fernet imported into the US. Living in the bay area, I could have just as easily ordered it at a bar but I sometimes like trying new things like this at home, where I can experiment a bit. My first taste was in the San Francisco style — neat and chased with ginger ale — which gave me a good feel for the liqueur itself because it wasn’t mixed. I’m not normally a ginger ale drinker but it paired with Fernet’s herbal flavor very well. My second taste was mixed with Coca-Cola in the Argentinean style, using an unopened bottle of Mexican Coke I still have in the back of the refrigerator left over from the Cubas Libres I made back in April. This second style wasn’t bad, but wasn’t great either. As I’ve said before, I’m not a Coke drinker, so I’ll stick with ginger ale next time (and now I have to find one made with real sugar instead of HFCS).

funny – when we went to the Edwardian Festival back in Jan. It was kinda hosted by Fernet-Branaca. The Great Amer. Music Hall – had all kinds of special drinks made with it. I can’t tell you what I remember drinking – but I do know I enjoyed them. It’s good stuff. I think I need a bottle for my bar. (which is getting crazy by the by)

They sponsor a lot of events in SF, probably exactly because we drink so much of it here. Lots of clubs and bars have Fernet posters up all over the place.

I love Fernet Branca – alone – no ice no nothing straight from the bottle…. well, passing first through a glass before I drink it of course…. unless I don’t have any glass nearby.

We had it for when we (me and my two sisters and brother) had trouble with the stomach, travelling around europe, especially to Spain, at a very early stage of our life – it’s some kind of a medicine miracle drink. Works every time! Can only recommend it!

I’m from Argentina, and it’s true that Fernet is very popular here. A 1/3 of fernet and 2/3 of cola.
We have a lot of local brands, besides Branca.
An old recipy for Fernet is putting just a bit in a glass, then add sparkling water (which creates a lot of foam). As the foam goes down add a lot of a vermouth named “Cinzano rosso” or similar . You gonna like it.

Thanks Miguel. I just spent a couple weeks in Buenos Aires in December so I had a chance to check out the selection and drink it Argentinian-style in the bars.