Summertime is finally upon us here in Portland and that means it’s time to break out the Martin Denny and start mixing up some tropical cocktails again. I’ve found my supply of appropriate ingredients to be a bit lacking, but luckily there’s a great new line of products available this year to help solve this problem: Trader Tiki’s Exotic Syrups. 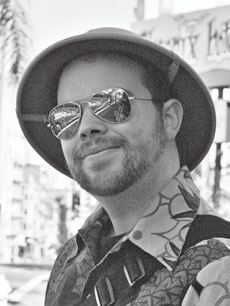 Trader Tiki is Blair Reynolds, a bartender and tiki aficionado here in Portland. He launched his hand-crafted syrup line with three flavors back in December 2009 and has been kicking ass ever since, bringing the line up to seven varieties in just seven months. Having considered dabbling in cocktail ingredient production myself, and also helping to run an unrelated small business, watching Blair crank this stuff out is amazing. I know exactly how difficult this is.

Blair will be active at Tales of the Cocktail in New Orleans coming up in a couple weeks, speaking on tiki bars and developing tiki drink programs, and will also be participating in a cocktail and food pairing event. While he’s temporarily on hiatus from bartending while he works on some other projects, you can normally find Blair at Thatch Tiki Bar Wednesday and Saturday evenings, and at the quarterly tiki night at Teardrop Lounge (next one happening in August).

Keep reading for an interview I did with Blair about his syrups and the other stuff he’s up to. 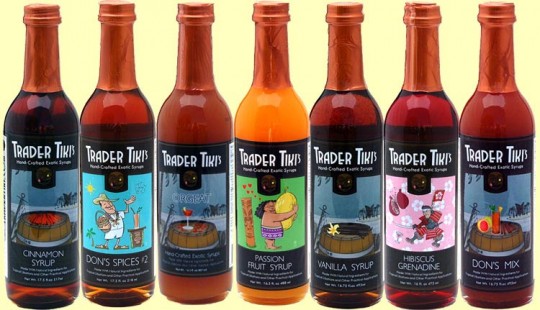 Hey Blair, thanks for taking the time to talk with me. Let’s start with a little basic info about yourself: Who is Trader Tiki?

Trader Tiki is, well, me. Trader Tiki was a little domain name I registered around five years ago to begin selling, believe it or not, Moai-shaped Mai Tai scented candles. Well, I never got around to it (and was horrible at candle making) so it sat around, unused, until 2007 when I began blogging about cocktails. Having been a bartender, and a tropical drink enthusiast and inspired by the work of Rick Stutz and Paul Clarke, I thought I’d weigh in to the internet with my thoughts, share a few favorite recipes, and find like-minded others. Since then, I have done far, far more than that, bartending tiki nights, speaking at various shows, and releasing a product line. People do call me Trader Tiki, but “Blair” works just fine.

How did you first become interested in tiki culture?

You could say Disney’s Enchanted Tiki Room stayed as a “tickle” in my brain since I was a wee one. From there, I met with folks more ingrained in the just beginning Tiki revival, centered around Tiki Central, an online bulletin board. The drinks were great, the times were good, who wouldn’t want to help both keep and spread good times?

A lot of people are making their own cocktail ingredients these days, from simple infusions to more complicated things like tonic and bitters. How did you get started making your own syrups?

I started making my own syrups because I had to! Back when I first started getting into this, no one was making cinnamon syrup, passion fruit syrup, and definitely no Don’s Mix or Don’s Spices #2! I had to mix, find, figure out, fail, and all sorts of fun stuff before getting to the damned drink, and who even knew if that was going to be good? Lots of effort, and the reward, well, could be spectacular, but it’s takes some level of madness to craft your own ingredients.

Your syrups seem to be doing very well, based on the number of retailers stocking them. Were they a product idea from the outset or had you been making them for personal use for a while before deciding to market them?

The syrups were definitely not planned from the get-go. In fact, it wasn’t until last year that I started to think this would even be a good idea. I was toying with the idea, but it didn’t really take flight until mid-last year, when I decided I’d heard enough of folks saying they love tropical drinks, but couldn’t make one ingredient, didn’t care to hunt for another… the obscurity of ingredients had the potential to lead to a limited if not completely kaput tiki revival in the cocktail scene. So I decided to make it easier for everyone and come out with a line of ingredients based on what was used “back in the day”, with the modern twist of all-natural and preservative-free syrups.

You’re fairly well known in cocktail and tiki circles, yet your primary occupation is completely unrelated. What made you decide to keep your day job rather than work in the spirits world full time? (Or are you working on making the transition?)

You ask as though I had a choice in maintaining a day job. I actually did make the transition to bartending full-time last year, but an opportunity arose I couldn’t pass up. With the syrups business growing exponentially, and other plans coming to fruition, I expect to be back to 100% in the bar scene in the next few years.

Creating recipes involves a lot of trial and error. Were any of your syrups particularly challenging to get right? Are there any flavors you just can’t nail?

A lot of the syrups came from recipes I’d developed in my kitchen and had been using where I was working and at home. Some things had to be changed for production and preservation, sugar levels, adding gum, etc, but I paired up with a pretty smart compatriot in the food production field so transitioning the recipes for the shelf wasn’t too difficult. The Passion Fruit, for all its simplicity, took about five retakes to get right. Batches one through three all had a bit too much separation, batch four was tart enough to make you pucker, but test batch five… perfection! If there’s any flavor I have yet to nail it’s ginger. I’ve used fresh ginger, ginger oleoresin, cold-pressed ginger oil… you name it, I’ve tried it. It always tastes amazing at first but goes flabby after a week or so, and I refuse to use cayenne to mask that. One of these days ginger, one of these days…

What’s next for Trader Tiki? Any new products you can talk about? Will you be branching out of syrups into other things?

The world is one big pu-pu platter and I’ve got a really big fork and spoon. I’m hoping to get Falernum and Honey Mix out before the fall, and am just finalizing recipes now. There are other things on the horizon but those will come in time. 2010 has been a big year with the release of the syrups and things are just getting better.

Finally, can you share a recipe with us? What’s your favorite cocktail using one of your syrups?

Brian over at Teardrop Lounge made up a wonderful drink called the Patent Pending, though it could just as easily been called “Blair Candy”, since it contains pretty much everything I like:

Stir all ingredients and strain over one large ice cube in an old-fashioned glass. Squeeze a grapefruit peel over the surface, discarding the peel.

I hope you enjoyed this interview with Blair. This is the first of a series of articles I’ll be writing showcasing small, independent businesses in the cocktail world. Do you have a story to tell or know someone you’d like to see here?