Anvil is a bar whose reputation precedes it, even all the way up here in Portland. I first became aware of their existence in 2009 when their list of cocktails everyone should try at least once made the rounds of the online liquorati. Like everyone else in the boozeosphere, I noted Anvil as a must-visit bar in the unlikely event I ever visit Houston and started marking drinks off the list.

As it happens, almost exactly two years later I found myself in Houston on unrelated business and naturally took the opportunity to check out this bar I’d heard so much about. We rented an apartment in Houston’s Montrose neighborhood where Anvil is located and eagerly looked forward to our first visit. 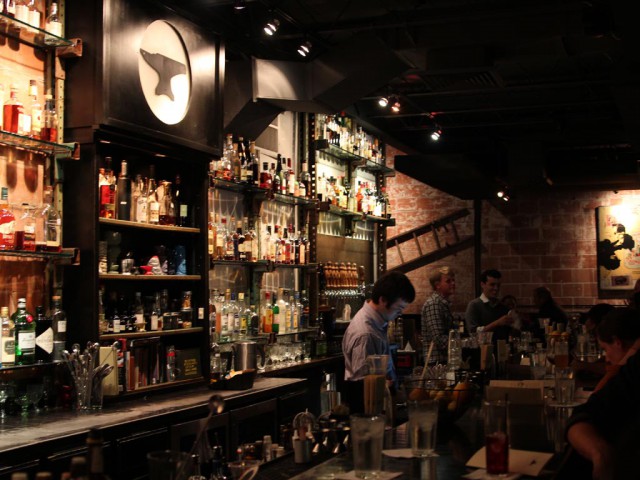 Preferring to avoid the crowds, we opted to go on a Sunday evening around 8:00pm. Walking into the bar we found the scene nice and quiet and took a couple seats toward the center of the long bar, which was amply staffed by three bartenders. The interior space is rectangular and is done up in wood, steel, and brick. The entrance is one of the short sides of the room; the bar spans most of the longer left side and the right side, facing the street, is all windows.

The menu was impressive. After much consideration, our first round consisted of a Tin Pan Alley for Sarai (hazelnut-infused bourbon, lime, orgeat) and Smoke & Mirrors for myself. Both were nice but the Smoke & Mirrors really blew me away. Made with rye, Fernet Branca, cacao, lemon juice, black peppercorn, and egg white, the drink is described in the menu as “a richer, herbal whiskey sour”. It was a great way to start off the evening’s menu explorations. 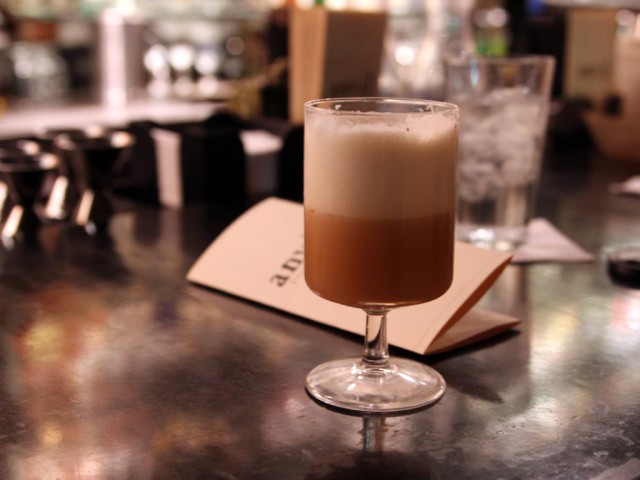 For our second round, Sarai decided on Eve’s Downfall, made with rum, Don’s Spices #2, lemon, sage, and apple cider, while I had The Brave, a bitter, smoky mix of mezcal, sotol, Averna, curaçao, and Angostura bitters.

We had plenty of time to make our choices; none of the three bartenders asked once how our drinks were doing or whether we would like another round, even after our glasses were empty ten minutes or so. We eventually had to flag one of them down from the other end of the bar where they were talking to each other and some friends at the rail. Sadly, this was repeated when it was time for our third round (an Improved Whiskey Cocktail for myself and an Italian Bootstrap for Sarai). 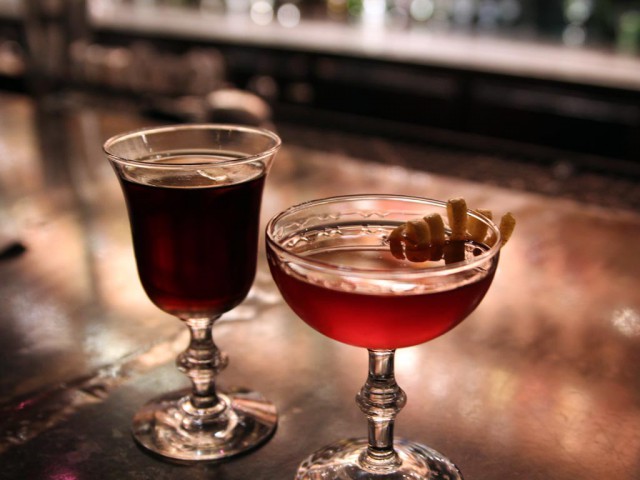 We spent around two hours at Anvil this evening. While all our drinks were very well made and quite delicious, our experience at Anvil was slightly marred by the inattentive and seemingly disinterested service. I understand that bartenders are sometimes simply too busy to chat or even pay attention to everyone at the bar, but with three bartenders on duty and a peak of around 15 customers in the bar at any given time, I don’t expect to wait ten minutes to order a drink when both our glasses are empty. A little small talk once in a while would be nice too. Sure, they were all pleasant enough when we spoke to them, but none seemed interested in more than the bare minimum of small talk that politeness requires.

So if you’re in the area, by all means stop in to Anvil. The cocktails won’t disappoint (and hopefully the service won’t either). 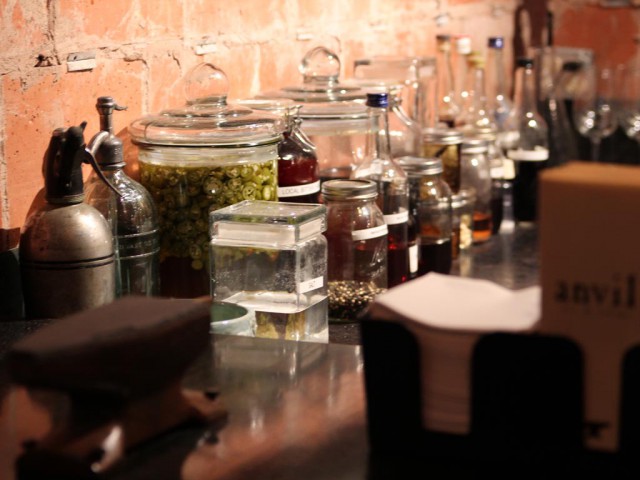 The Smoke & Mirrors sounds great. Any idea what the ratio of ingredients is?

Unfortunately no, but I’ll post the recipe if I can get it or figure it out.

Was the cacao ingredient dry (sprinkled on top) or was it creme de cacao?

So if we use the whisky sour recipe you posted in August as a start, 2oz rye, 1oz lemon, egg white, seems like a good start. Fernet Branca shouldn’t be much, maybe 1/4 oz?

I’m really anxious to try this, will have to head to liquor store for some FB. I’ll post back with the results. :)

There were some coarse cacao nibs on top but there may have been some shaken with the drink as well (I don’t think that would actually impart any flavor though). Definitely no creme de cacao in this.

Do go light on the Fernet, as it can be pretty overpowering.

Let me know what you come up with!

I am really sorry that you received that kind of service in my city. As a native Montrose resident and cocktail enthusiast that was disappointing to hear that they weren’t more friendly. I hope you enjoyed the rest of your time in Texas!