Our second evening in Prague, Sarai and I were wandering around the Old Town Square area. It was so cold that we had to make frequent stops to get indoors and warm up. After stopping first for dinner, then for coffee at the Franz Kafka Cafe, we decided to go looking for a dive bar we found in our TimeOut guide that sounded promising. It turned out this bar wasn’t there anymore, but in its place we found Bar and Books. 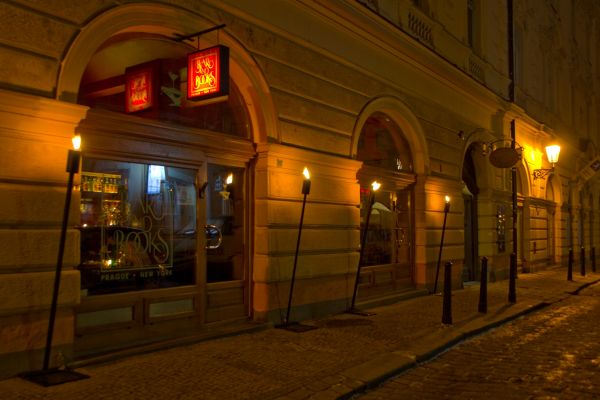 Photo from the Bar and Books web site

After seeing the library shelves along one wall we decided to stop in and investigate. It was still early evening and the bar was empty. As we walked in, we were greeted by the second cutest girl I’ve ever seen, who took our coats and asked us to take a seat at one of the candlelit tables. We were given menus, including a separate one just for whiskey, which sounded like just the thing for a cold night.

The mid-range whiskeys ran about 195 Kc each, roughly $8 US, and were served a silver tray with two glasses of whiskey, a small ice bucket and tongs, and a small pitcher of water, allowing us to have the whiskey however we wanted. 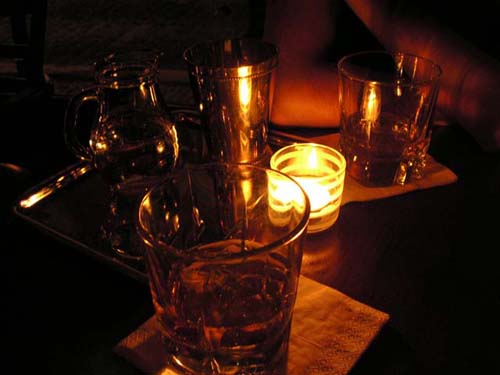 After our third round the pretty waitress brought us complimentary cocktails: champagne for Sarai, sherry for me. A couple rounds of whiskeys later we got two more. It was warm and comfortable inside, with nice ambiance, and so cold outside, that we ended up staying far longer than we expected to. At one point the other waitress on duty came over to tell us what great customers we were and ask where we were from. It turns out she was an American expatriate from Indiana who had moved to Prague the year before.

The total drink count came to five whiskeys each, plus the complimentary drinks, which is far more than we usually drink. We started off with Bookers and tried a different Bourbon each round. I’m amazed we managed to find a cab and get back to the hotel.

The bar itself was very stylish, with lots of red and dark wood. They had a TV in one corner playing James Bond movies all night; nice touch, but thankfully the sound was off. The claim on their website is that they are “The most refreshingly civilized places to meet”. The one in Prague was modeled after two existing locations in New York, and at the time of this writing a fourth is planned for Bucharest.

Mmmmm…. that sounds delightful. I wish I was there now. Maybe I’ll turn off the lights, put my Bookers on a tray and imagine myself in Prague. Or maybe I should just get out of the country more.

Indeed. There’s a whole world of great bars out there.