After visiting Harry’s New York Bar in Paris, our next stop was the world-famous Bar Hemingway. Located at the Ritz Hotel, Bar Hemingway is probably the most well-known, and almost certainly the most expensive bar in the world. While I don’t have an unlimited budget, how could not stop in for one drink?

The bar is run by Colin Field, twice voted “The Best Bartender in the World” by Forbes magazine. Colin was behind the bar when we arrived but we opted to sit on a sofa in the small side room rather than at the bar so we didn’t actually meet him. Our order instead were placed through the impeccable waitstaff. 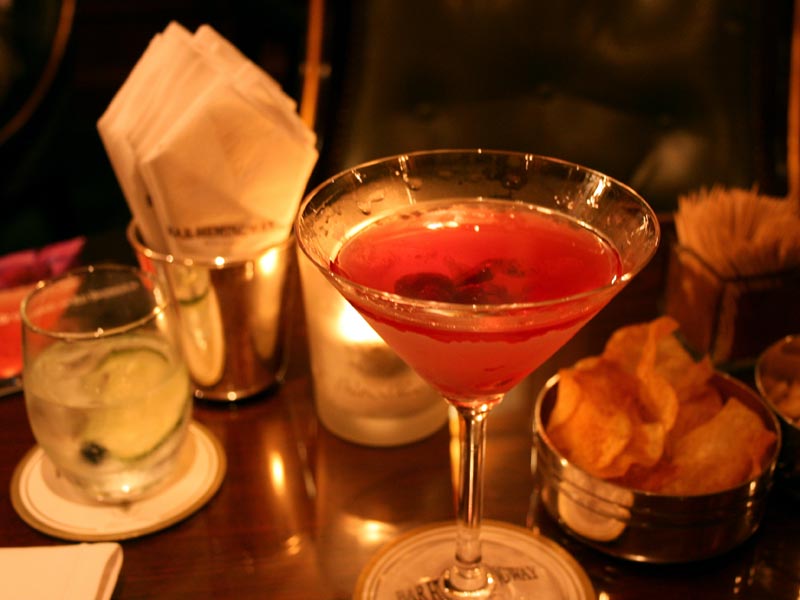 The Bar Hemingway is also home to the world’s most expensive cocktail, the Ritz Sidecar. This is the classic Sidecar, made with 1830 Ritz Reserve Cognac. Made from vines harvested prior to an insect plague in the 1860s, the grapes used to make this Cognac no longer exist, and the supply of the spirit itself is dwindling. Not too quickly, due to the price tag, but steadily nonetheless. We found when reading over the menu that the price of this cocktail has increased from 400€ to 700€, possibly due to the shrinking supply. With the current dismal state of the US dollar, this translates to roughly $950.

Needless to say, Ritz Sidecars were not on our menu this evening. We opted instead to order from the three drinks our waiter recommended to us. Listed in order of strength, the first was a light cocktail made with Calvados and apple cider, among other things. It sounded nice, but I wasn’t really in the mood at the moment. The second drink was the classic French 75, and the third was a Raspberry Martini made with housemade raspberry-infused vodka. I ordered this one, pictured above, while Sarai opted for the French 75, pictured below. Both were quite good, especially Sarai’s, which tasted like it was made with a very nice Champagne which lent an extra pop that I haven’t gotten making them at home. 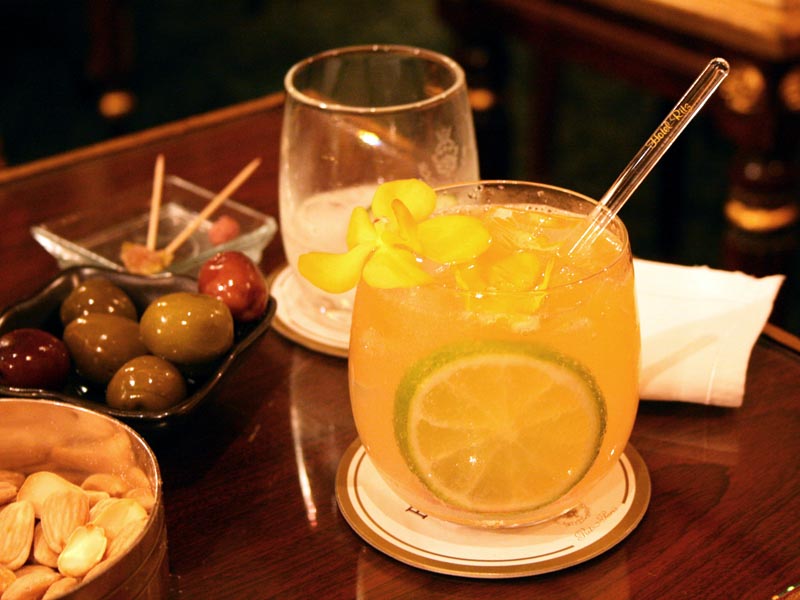 While the prices for these weren’t in the same league as the Ritz Sidecar, coming in at 28€ apiece — about $38 US — they were still the most expensive drinks I’ve ever ordered, or likely will again. I would have loved to stick around for a few hours but just couldn’t at these prices. As it was, I was tempted to order a second round but thought better of it.

People have asked us what we get for these prices. The drink quality is excellent, but not enough to justify the price tag on their own. The other part of the value comes in the five-star service, which was simply amazing. We weren’t sure where we wanted to sit when we first entered the bar, starting to put our stuff down at one table before noticing the smaller nook off to one side of the room. This indecision lasted maybe 30 seconds total, but before we picked up our coats again we already had a waiter at our side with glasses of berry and cucumber-infused water and small plates of nuts, potato chips, and olives. He invited us to pick any table we liked, suggesting the sofa over a small table in the side room, and brought our water and snacks over, also leaving us with menus and describing the featured drinks.

Before describing their recommended cocktails, he asked if we preferred to speak in French or English, and continued in perfect English once we requested it. Once we had our drinks, the waitstaff was attentive without being intrusive, only checking up on us now and again to be sure our drinks were ok but never pressuring us to order another round or dropping the check off before we asked for it.

We were a little apprehensive before coming here. Let’s just say that the Ritz is not usually our style. We were dressed decently, but definitely casually, preferring to travel light even if it meant possibly not having appropriate attire for our visit here. This was not a problem though, as no one gave us a second look once we entered the hotel or the bar itself. The other people in the bar were dressed in nicer casual clothing or suits, but nothing too fancy, given that it was only 7:00pm. The clientele at the time were mostly French-speaking but we did hear English coming from a table or two, as well as from Colin himself while talking to some of the other patrons. 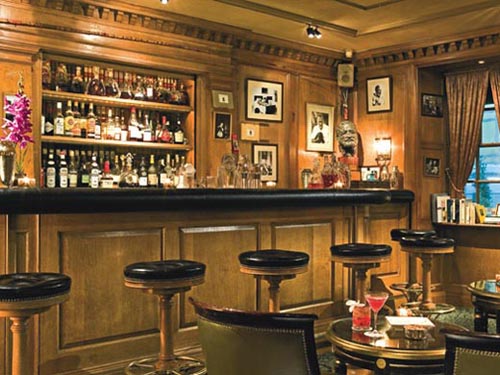 I didn’t take as many pictures here as I would have liked. Alongside my desire to document in photographs places like this that I visit, I also have a conflicting desire to not appear to be an obnoxious tourist, waving his camera around all over the place. That would be even more out of place in the quiet, subdued atmosphere at the Bar Hemingway. This seems to be a common feeling, as I was unable to find any good pictures of the bar around the web. The photo above was taken from Ritz Hotel promotional material just so I’d have something to show.

While we were here we discovered that Colin hosts a cocktail class here every Saturday afternoon before the bar opens for business at 6:00pm. We were there Saturday evening, just a few hours late for it, and it was our last weekend in Paris. I don’t know when I’ll be in Paris next but I’ll definitely be coming here for a drink when I am, and can hopefully attend one of Colin’s classes then.

[…] stopped by a couple of Paris’s world-class bars while we were there: the Bar Hemingway at the Ritz hotel, and Harry’s New York […]

It was in the mid eighties! My wife and I did a lot of traveling to Europe in those years. She wanted to have a drink at the Ritz and as soon as we sat down at the bar, she ran into the bathroom to take a picture of the solid gold faucets. When she came back we were unceremoniously thrown out. We were wearing designer jeans…back in those days they were ‘Sergio Valente’…and…it was a no, no at the Ritz. Can’t remember whether we ever got our drink, but we had a good laugh at being ousted.