After two long years of preparation, June 25th saw the much-delayed opening of Beaker and Flask, Portland’s latest cocktail-focused bar/restaurant. The Portland Mercury has some background about the restaurant and its founders but it can be summed up as simply as “good things come to those who wait”.

I almost joined a friend of mine at Beaker and Flask on their opening night but decided to hold off a bit, not only because it wasn’t convenient for me but also because I preferred to visit on a regular night when they’re not so crowded and they’ve had a chance to settle in a bit. So a month or so later we found ourselves here on a Thursday evening, ready to see what all the excitement was about. 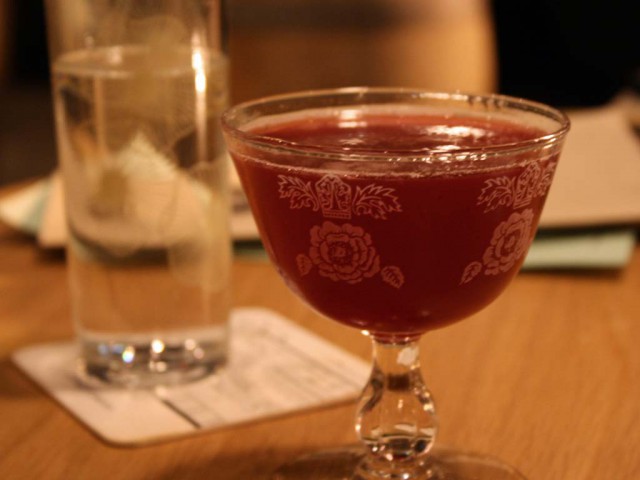 Our first impression of the space was that it is very “restauranty”. Which makes sense — it _is_ a restaurant, after all. The floor plan is wide open, with the bar at the center and a large round-ish area ringed by booths with empty whiskey barrels in the center, presumably for people to rest their drinks on if they’re standing. I’m sure this works very well on busier nights but the evening we were there it felt very empty, despite most of the tables along the wall being occupied. We weren’t here to eat but settled into a booth to peruse the cocktail menu.

The menu was everything we expected: a dozen or so drinks, each one as interesting as the last. For our first round I had a *Doc Ellis* — rye, limoncello, Dolin Blanc vermouth, Cynar, bitters — while Sarai opted for the *12 Gauge Cocktail*. To be honest, I had my eye on the 12 Gauge as well but wanted to get something different so we could sample more drinks overall. Hers was better — so good, in fact, that I later ordered one for myself (that one was was rye, orange, Rammazzoti, and sweet vermouth).

Later rounds included a Black Manhattan for myself and a *Night and Fog* and *Daddy Issues* for Sarai (all good cocktails have stories and I’d really like to hear the story behind _that_ one). Apart from these, we were able to sample a good number of other concoctions thanks to our being there with three other people. 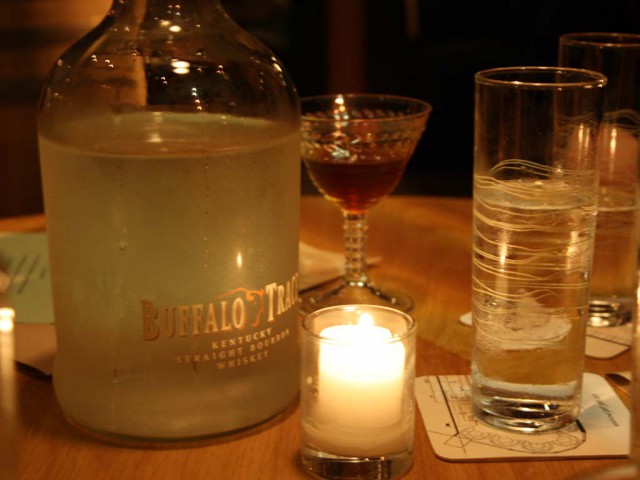 One of the interesting things about Beaker and Flask was the glassware. Even this had some thought put into it, as our drinks throughout the evening were all served in a variety of mismatched glasses, frequently vintage, or at least vintage-looking. This presentation helped to keep things interesting. Water was served at the table in a large, empty Buffalo Trace bottle, which I thought was another nice touch.

While a lot of care had gone into the menu and presentation and the drinks were top-notch, I have to say that the music toward the end of the evening completely ruined the ambiance for me. When we arrived they were playing quiet Elliot Smith, which was great, but by the end of the night we had somehow transitioned to loud 1980s top-40 rap music, which clashed quite badly with nearly everything else about the place. The Humpty Dance? Seriously? I would have assumed they were trying to signal closing time by playing intentionally bad music, the way some clubs I used to frequent did, except that this actually went on for quite a while, long before they actually appeared to be closing up.

Hopefully that was an isolated incident though. I’ve got a couple of friends who haven’t been here yet so I’m sure I’ll be back soon. And like I said, the drinks are worth it.

Beaker and Flask can be found on Twitter as @BeakerAndFlask.

I’ve been back to Beaker and Flask a number of times since writing this review and the music is definitely much better most nights. I’m not sure what happened that one day, but I haven’t seen it repeated.