Tucked away in a largely industrial neighborhood in NW Portland, Carlyle is very much a destination spot, not somewhere you just wander in to. While all the bars in Portland serve food, Carlyle is first and foremost a restaurant, but they do recognize the benefit of having a great bar as well. With a bar program led by Jacob Grier, Carlyle is a destination for cocktails just as much as it is for food.

Sadly, your time to try out these cocktails is limited: Carlyle just announced that they’ll be closing their doors on February 14. We stopped in the other night to check out the closing cocktail menu and chat with Jacob about spirits, CocktailCamp, and his plans once the restaurant closes. 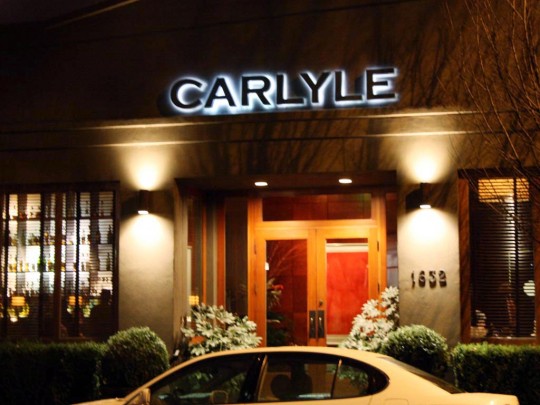 Carlyle has been full nearly every night since the closure was announced, but we managed to find a couple seats at the bar, which was off to one side of the main dining room. The restaurant is upscale, but also nice and comfortable with simple decor and quiet Chet Baker playing in the background. The entire bar selection was on display at the back of the bar on ceiling-high shelves (which left me wondering how they get the bottles off the top shelves).

We ordered our first round from the menu, which was primarily made up of . Sarai started with the Erica’s Impulse — brandy, allspice dram, lemon, simple syrup, and orange bitters — while I went with H’ronmeer’s Flame, made with rye, Ramazzotti, Carpano Antica and finished with flamed orange zest (and apparently named after a comic book character). Both were fantastic, and I would have been happy alternating between just those two all evening.

But where’s the fun in that? While that might be a good plan for an evening at home, when a better bartender than myself is mixing the drinks, I want to experiment a little more. So for our second round, we had drinks based on Rowan’s Creek bourbon, which we hadn’t tried before but comes highly recommended. Sarai and a simple Old Fashioned, made without muddled fruit but garnished with a cherry and healthy piece of orange zest. I don’t know if my drink had a name, but it was a simple Manhattan variant made with Carpano Antica and Pelinkovak, a Croatian amaro. I frequently make Manhattans with amari in place of vermouth, so this was right up my alley. The Pelinkovak was new to me but it’s found its way onto my shopping list. Combined with the Rowan’s Creek, it made for a nice, complex drink. 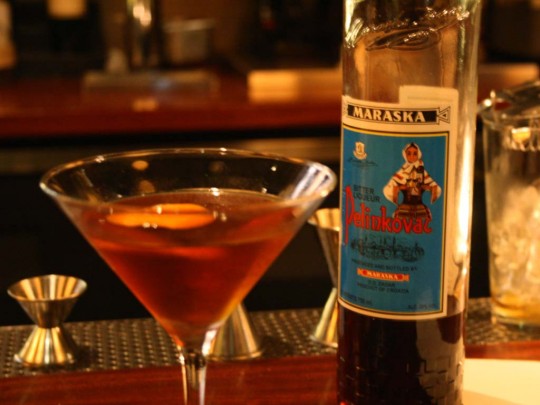 Jacob’s plans once Carlyle closes are up in the air right now but he mentioned the possibility of leaving Portland for Los Angeles, so you’d do well to visit Carlyle before February 14.