No trip to Paris is complete without stopping by a couple of their world-famous bars and Harry’s New York Bar was the first one on our list.

Advertised as The Oldest Cocktail Bar in Europe, this bar originally opened in 1911 as just “New York Bar”. In 1923 it was bought by Harry MacElhone who added his first name and popularized it among the growing numbers of American expatriates who were starting to flock to Paris. Some of their famous clientele included Sinclair Lewis, Coco Chanel, Rita Hayworth, and Ernest Hemingway (what famous bar didn’t he frequent?).

Note: Harry’s New York Bar in Paris is not to be confused with Harry’s Bar in Venice, Italy, another well known bar and the birthplace of the Bellini. I walked past this Venetian landmark when I visited Venice a few years back but, alas, didn’t go inside. 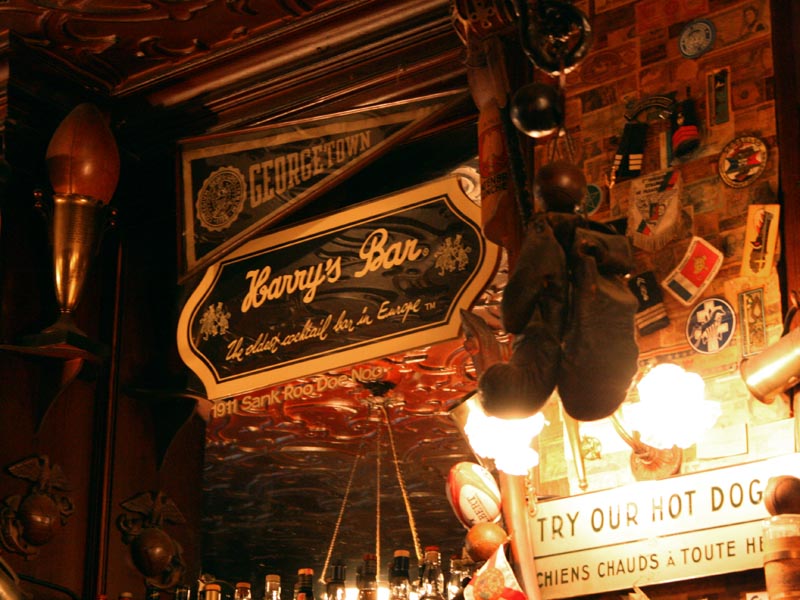 We went to Harry’s just as the after work crowd was beginning to show up. It’s a popular spot so we wanted to get in early enough to get a table and not have to fight for a bartender’s attention. No worries here, the bar was only half full when we entered through the swinging saloon doors and we got a good table and prompt attention, as the white coat-clad bartender walked over to bring us a dish of snack mix and take our order. We started out by ordering a round of Sidecars, which were served up in cocktail glasses, but without the sugared rim we sometimes get in the US. The origin of the Sidecar is unknown, but Harry McElhone, at least at one time, claimed he invented it himself so I thought it appropriate for my first drink of the evening. As we sipped our drinks, we took a look around to get a feel for the bar.

As the name implies, this is definitely an establishment for Americans and anyone else who likes an American-style cocktail bar. The walls were adorned with university pennants and there was even a flyer up reminding Americans to request their absentee ballots for the coming 2008 presidential election (no surprise that the French are eagerly awaiting a change of administration here). The crowd was mixed, with both English and French being spoken, and the English in both American and British accents. They even offer a pronunciation guide for non-French speakers: Ask your cab driver to take you to Sank Roo Doe Noo and you’ll find yourself at Harry’s. 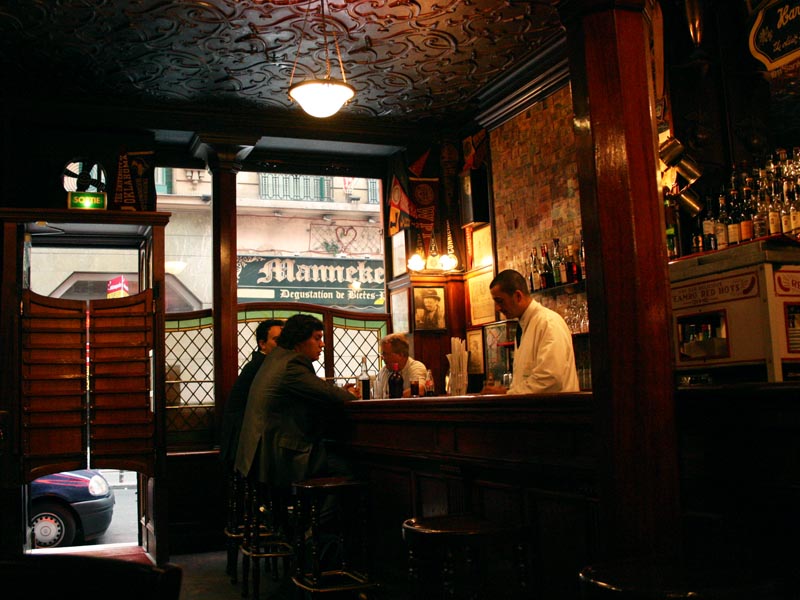 My second drink was, fittingly enough, a Manhattan, while Sarai had an Old Fashioned. Both were well made and quite good. The Old Fashioned was made without orange, which I like, or club soda, which I detest in this drink.

I don’t know if the Sidecar was really invented at Harry’s Bar — the Stork Club Bar Book says otherwise — but they are commonly known as the creators of the Bloody Mary and also lay claim to the French 75, which is another favorite of mine. The origins of all these drinks are highly disputed though, with the Ritz Paris claiming the first two of these as their own. 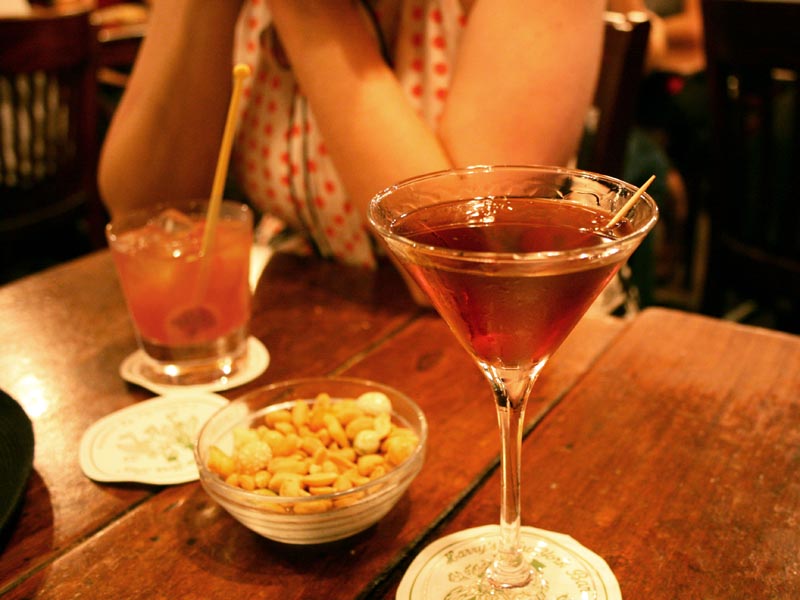 This isn’t a cheap place to drink — our four drinks were 12€ apiece, around $18 USD at the time — but definitely worth checking out when you’re in Paris.

[…] We stopped by a couple of Paris’s world-class bars while we were there: the Bar Hemingway at the Ritz hotel, and Harry’s New York Bar. […]

Nice piece on Harry’s, but for the record his name was Harry MacElhone, not McElhone. I never knew Harry, but his son and grandson (Andy & Duncan) were dear friends of mine.

A now deceased friend of mine, Bob Daugherty, is featured in the cartoon flying on the back of the 747 on the wall just inside the front door and to the immediate left on the wall at the end of the bar. Bob also had been good friends with Andy and Duncan and had been the instigation for the “Chicago Corner” memorabilia under that framed cartoon. I believe that he introduced such famous Chicago visitors as George Halas and Wally Phillips to Harry’s.

I was just curious if you by chance knew of him.

I know the cartoon you are speaking of, but I never knew Bob Daugherty. Andy used to tell me that at one time he had a fairly regular on-air conversation with a Chicago radio personality. Ah, those were the days!

Went to Paris October of 2008. Stopped at Harry’s Bar and Grill. Had the most interesting drink of my life. The pick me up. Had good conversation with who I consider a dear friend I will always hold close to my heart. However no longer can our love be relived. He is the father of my child. Our daughter Sara is on a dollar bill at Harry’s. I hope someday my daughter can go to Paris and find it at Harry’s. Paris will always be a special place for me.

My wife and I went to Harry’s Bar sometime in the mid nineties. We had martinis and they cost us $15 each. That was back when the dollar was much stronger…so your price at 12euros sounds OK. I was trying to remember the sign with the english phonetics. …Roo Sank…Thanks! Your site brought back some memories of good times and lots of laughs.

We also went to Harry’s Bar in Venice. It was ok…not great. The bar at the Monaco Hotel just across the alley was much better.

As the sign says, “Just tell the taxi driver ‘Sank Roo Doe Noo’.” Agree with you about Harry’s in Venice. I’ve never eaten there, but the bar itself is nice. Only problem is that the restaurant is so damned expensive. The big joke is that if you are going to Harry’s in Venice for lunch, should you go to the bank before lunch, or after lunch (or both!).

As a longtime IBFer, I am definitely prejudiced toward Harry’s in Paris — the original, and the one and only.

I’ve walked past Harry’s Bar in Venice but didn’t actually go in (that trip predates this blog, or else I definitely would have posted about it).

A friend of mine will be in Venice in a couple weeks and he always stops in at Harry’s for a Bellini when he’s there, so hopefully I’ll get some photos and a write-up to share.

The man running Harry’s in Venice wants everyone to believe it was the original, although he knows if he says it openly he’ll have Parisian lawyers all over him. In 1931, Harry MacElhone gave permission to Guisippe Cipriani to use the name. As Andy once told me, the old man was a jewel, but, he said, “I’ve had to put the current one in his place on occasion.” Ouch!

If you are ever in Florence, Italy, by all means go to Harry’s there. It’s on the Arno River, just around the corner from the Excelsior Hotel. My old pal Leo (Vadorini) not only makes a terrific bellini, but a really great martini as well. If you are there at lunch, try a cheeseburger—-best on that side of the Atlantic. And tell Leo I said hello.

I lived in Paris in the late 60’s – early 70’s and spent many a late evening at Harry’s… lots of memories. A great place where you can always take part in a good time. You can find cheaper places, but it ain’t Harry’s!!

Amen, Chuck! Some of the best conversations I’ve ever had were with perfect strangers at Harry’s. Helluva place.

About 1957 I went to Harry’s Bar with my French boyfriend and his English speaking friends. We were in the basement and the piano player asked me my choice of a song. Without giving it much thought I stated, Autumn in New York. Afterwords I thought that’s ridiculous as I was from the San Francisco Bay Area. But yesterday while playing a CD I discovered the gentlemen who composed April in Paris also composed Autumn in New York. Well, how about that! Every time I returned to Harry’s the piano player started playing Autumn in New York. Well, what great memories. From all the comments, I think I will stick with my memories.

The piano player at Harry’s in the late 1950’s and early 1960’s was my brother-in-law Charlie Lewis. As a young musician in New York in the early 1920’s, Charlie was a friend of George Gershwin so when both of them were in Paris a few years later, they reconnected and played tennis together. While Gershwin was composing “An American in Paris” (which he did at Harry’s), he would play newly written parts of it for Charlie to get his opinion.

Well said, Audrey. Memories truly are roses in winter. Although it has been a while since I was last there, Harry’s will always hold a very special place in my heart. A civilized place for civilized people.

I spent part of my 52nd birthday in Harry’s, a near lifelong ambition fulfilled. Over the past 25 + years and several trips throughout Europe, I’d never made it to Paris. France, yes, but Paris, no. I was just a pre-teenager when I first heard of Harry’s New York Bar. We’d been to Harry’s in Venice, and that was okay, but Paris’ Harry’s was the one I wanted to try. We stayed at the George V (incredible), saw the Paris sites, ate the great meals, shopped the great shops, enjoyed every moment in Paris, but walking downstairs in Harry’s and listening to the piano player, eating a hot dog and drinking whatever the bartender suggested was a night not soon to be forgotten. Then it was off to the Bar Hemingway for cocktails and potato chips til the wee small hours. Talk about expensive? 30 euro for a drink there. That ain’t cheap, but some memories cost more than others…