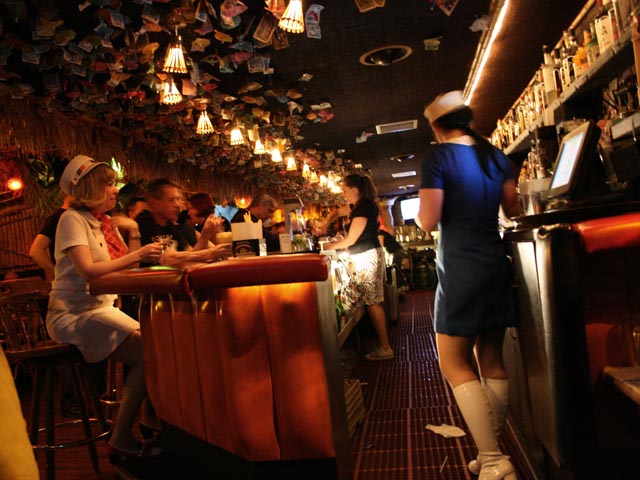 They had a drink special for the occasion, the Layover, as well as the usual Thursday classic drink special, which this week was Lani Honi. I had one of each. The Lani Honi, made with Benedictine, lemon juice, and light rum, was a little sweet but quite tasty. The Layover, on the other hand, tasted like it was made with mouthwash. I didn’t finish that one, but still have to give them credit for the presentation, if not the taste. 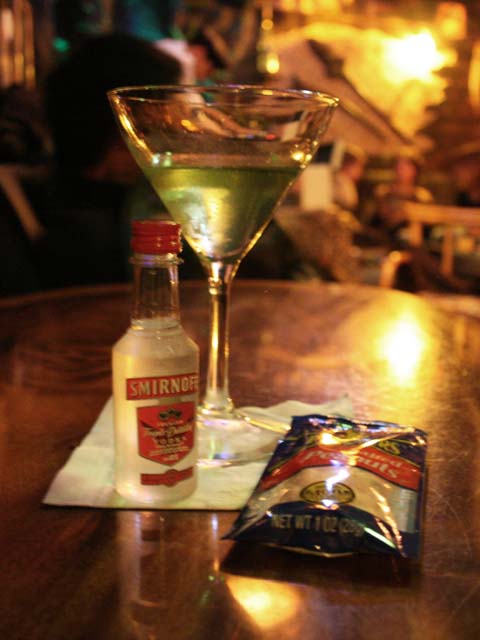 The music was pretty good, but very quiet, so I wasn’t always aware of what was playing. I don’t like music so loud that it’s hard to talk, but they could have turned it up a bit, at least early on in the evening when we were there. It did seem to get a bit louder over time, or maybe I just got used to it and was better able to hear it over the conversations around me. But still, better quiet than too loud.

Not many people were dressed for it, but I don’t expect many people have vintage pilot or flight attendant uniforms laying around. We certainly don’t. One of the bartenders, Stephanie, definitely had the best outfit, even down to the name badge, and it really added to the ambience. Good job.

International Flight Lounge happens the last Thursday of every month.

Kenn –
Thanks for coming, and for the positive review. Regarding the volume, the sound system at Forbidden Island is loudest in the hut booths and the quietest at the end of the bar by the tiki fountain where I DJ. And you are right, we want the music to be audible but not so loud to make it hard to talk. I’ll try to turn it up a bit more next time. Great pictures!

Thanks! Yes, as you could probably tell from the other pictures, we were indeed sitting near the end of the bar, right by where you were.

Can’t wait for next month!

Looks fun. I’m developing quite a list of places to go when I’m in Northern California.

I’ll be in Chicago next month, know any good bars?

Good, that’s what we’re here for!

Nothing in Chicago, I’m afraid. I haven’t been there since I was a kid and I don’t currently know anyone there.