We just got back from a long weekend in Seattle, where we were selling Sarai’s sewing patterns at Urban Craft Uprising. The craft show was great and we had plenty of free time in the evenings to explore Seattle a bit. One of our discoveries was the Knee High Stocking Co, a speakeasy-style bar in Seattle’s Capitol Hill neighborhood.

We were staying at the Ace Hotel in Belltown, which put us just over a mile from Capitol Hill, an easy walk on a warm evening like we had Sunday night. After a great dinner at a nearby vegan Thai restaurant, we walked over to Knee High for cocktails. 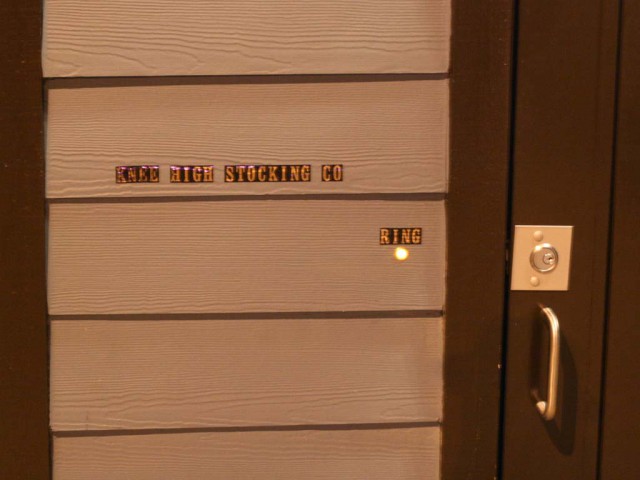 Finding the place was easy, but only because we knew the address. While it’s right on the corner, it’s easy to overlook unless you see the small letters next to the door reading “Knee High Stocking Co”. The door was locked but upon ringing the doorbell, Ben, our host for the evening, opened the door and invited us in, allowing us to choose to sit at a table or at the bar. We chose the bar. Once inside, you find yourself in an old apartment converted into a intimate, dimly lit bar. The front room is all tables with the bar occupying the second room, along with a few more tables.

Knee High Stocking Co., like many speakeasy-themed places, has a set of rules that should be adhered to in order to preserve the atmosphere of the bar. The first of which is the usual “Please speak-easy”, a request to keep voices low. Others rules included a request to not use cameras or mobile phones and to refrain from standing around the bar. After we had been there a couple hours, Ben kindly allowed me to take a few pictures for the site.

In keeping with the name of the bar, the drink menu was titled “Summer 2009 Catalog” and contained a nice selection of cocktails as well as some information about some of the lesser-known spirits and liqueurs being served. I was struck by indecision and told Ben some of my preferences and he made me a *Toronto* — rye, Fernet Branca, simple syrup, and bitters. It was great. Sarai’s first drink was a *Norma Jean*, which was made with muddled mint, gin, Cynar, and lemon juice, and was also very nice. Our second and third rounds included a *Widow’s Kiss*, *Champs-Élysées*, and a *Jerry Thomas Manhattan*, as well as our old standby, the Corpse Reviver #2. All of it good. 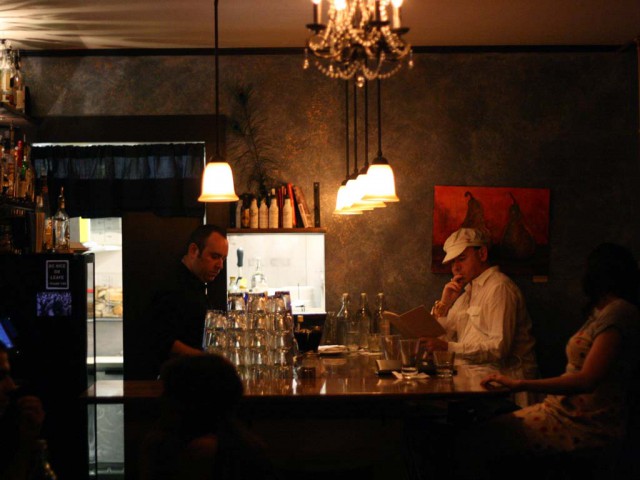 We visited on a Sunday evening and the bar was pretty empty, with maybe four tables filled at any given time. Our seats at the bar gave us an opportunity to see what other people were ordering and to chat with Ben, the bartender, about spirits, cocktails, and bars in Seattle, Portland, and elsewhere. Once conversation came around to Cocktailia, it turned out he had already seen the site while looking for info on Harry’s New York Bar in Paris; how cool is that?

From what I read before visiting, Knee High Stocking Co. can be pretty crowded on weekends so try it on a weeknight (they’re closed on Mondays) if you prefer not having to wait for a table (remember, no standing around the bar). I don’t know if they take reservations yet but they’re still fairly new and if their popularity increases they may have to start, at least on weekends.

Yup, they take reservations. When i stopped by (on a Sat night when it was too busy to fit our group), they gave me a business card with a phone number i could text to save a table.

Good to know, thanks.

I visited Seattle and missed this place because the only night I had open was a Monday… super bummed!!

Thank you for stumbling upon our little bar and the wonderful write up. Cheers!