As I mentioned previously, my recent visit to London included stops at a small handful of the nicer bars around the city. It’s always interesting to see what they’re doing in other cities around the world and comparing them to the places I know and love at home. The first bar we tried in London was *Portobello Star*, a nice, nondescript place in Notting Hill.

We arrived around 10:00pm, after walking over from a great Eritrean restaurant nearby. Bars in London close much earlier than those in the US, especially during the week, so 10:00 is about the latest you’ll want to arrive at most places. In this particular case, the early closing time was fine because it ensured that we’d get back to the tube in time to catch the last train back to our flat at Regent’s Park. Still, it’s strange hearing last call at 11:30 or so.

Upon entering, we opted for the large booth area in the back of the bar, beneath a colorful mural of an old fashioned radio. The bar was quiet, with only a handful of people sitting at the bar. On our table we found a beautiful embossed menu done in the style of Professor Jerry Thomas’s Bartenders Guide and promising “All kinds of juleps, smashes, cocktails, alexanders, sours, rickeys, punch, exotics, and other fancy drinks”. Not stopping with just the cover, the entire menu was well designed and cleverly written. It also informed us that we could feel free to take a copy home with us, which I did. I’ll post more photos of it soon. 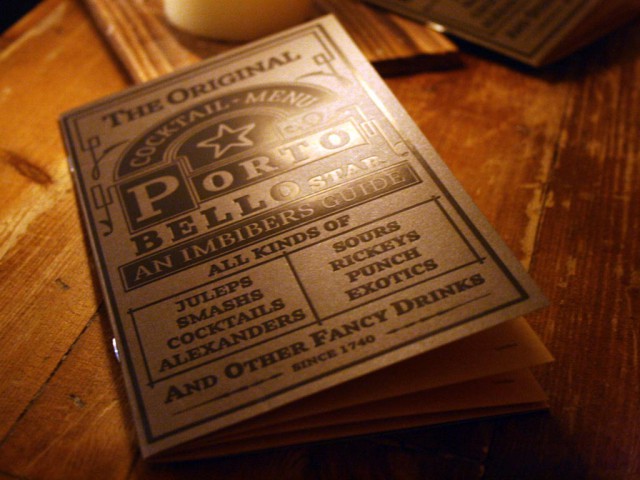 For our first round of cocktails, I ordered an *Earl Grey Marteani*, which was credited in the menu to Audrey Sanders of NYC’s Pegu Club. Made with Earl Grey-infused Tanqueray gin, lemon, sugar, and egg white, this was nice and light but with a bit of complexity. Sarai and Susannah had the *Bramble* and *Whiskey Smash*, respectively. Although she didn’t order one this evening, Susannah, a southerner transplanted to the UK, was happy to note that they make a proper *Mint Julep*, which she says can be difficult to come by in London. 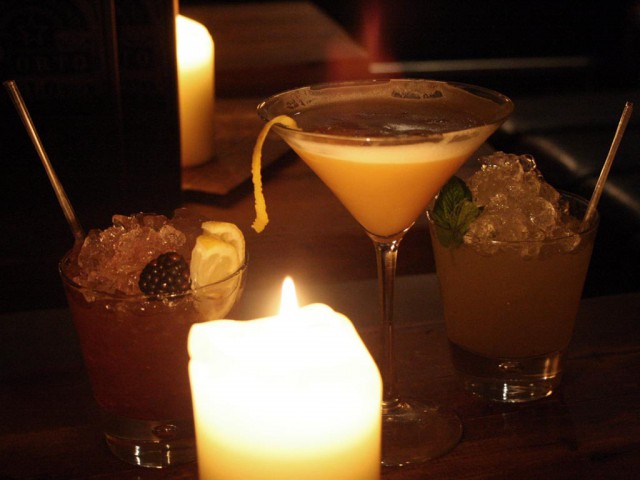 For my second drink, I went with a Manhattan. Besides being one of my favorite cocktails, it’s also a good way to gauge the quality of the bar. I’m happy to report that Portobello Star makes a fantastic Manhattan. I was a little apprehensive at first when I was asked if I wanted it perfect, sweet, or dry — I would think sweet vermouth would always be used unless otherwise specified — but I got over it as I watched the bartender at work. My Manhattan was made with unknown rye and vermouth (I couldn’t tell what they were from where I was sitting) and, as I watched, he added two different bitters and a few drops from a small unlabeled bottle and eyedropper. This immediately piqued my curiosity but I withheld my questions until I had tried the drink. The vote at the table was unanimous: this was a damn fine Manhattan.

In addition to the expected flavors, there was something else going on that I couldn’t quite identify, that I assumed was from the mysterious eyedropper. After a few minutes of tasting and speculating, I asked the bartender who confirmed that he used both Angostura and orange bitters, along with their special third ingredient: a house-made recreation of Abbott’s bitters, possibly the original bitters used in the Manhattan and a product that hasn’t been produced since the 1950s (the original recipe has been lost in history but that link has an approximate recipe as well as the writer’s own experience making them).

Going to Portobello Star first set the bar pretty high for the other establishments we’d be visiting on this trip. I definitely recommend stopping by if you’re in the neighborhood.