Those who follow me on Twitter know that I recently spent a few days relaxing in sunny Palm Springs. It was an impulse trip — we were going to be in LA for a week and had a few free days in the middle, so we decided to take a side trip. How we came up with Palm Springs specifically, I don’t recall, but we went from idle speculation to having a room booked at the Ace Palm Springs in record time. Because I’m incapable of visiting a new city without checking out the cocktail scene, I immediately started researching the state of cocktails in this desert oasis.

To be perfectly honest, I didn’t expect much. But as luck would have it, I stumbled across David Lansing, who seems to spend some time in that area when he’s not out traveling the world. We exchanged an email or two and the next thing I know, we were invited out to Sinatra Cocktail Hour as guests of the Riviera Resort and Spa. There’s a lesson in there somewhere, I’m sure. 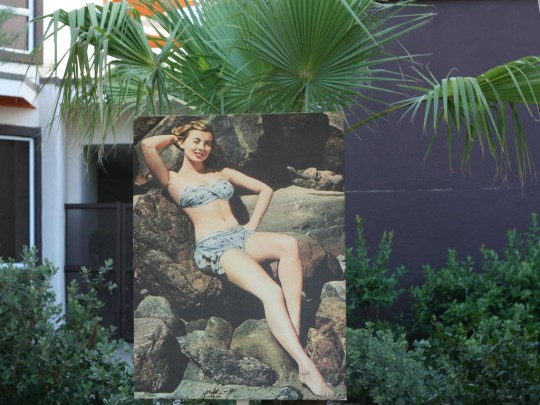 On his Palm Springs estate, Frank Sinatra had a flagpole situated between twin palms and when he wanted to summon the boys over for cocktail hour, he’d raise a flag with the Jack Daniel’s logo and then his friends would simply show up.

The Riviera is reviving this tradition with a 5:00pm ceremonial flag raising at the Bikini Bar, a poolside bar at the resort, free samples of the cocktail du jour, and food and drink specials until 6:00. Now “bikini bars” and all that you might associate with them are not really our style, but this is Palm Springs we’re talking about — on a 105° day, if you’re outside at all there’s probably a pool nearby. So what the hell, let’s go with it. 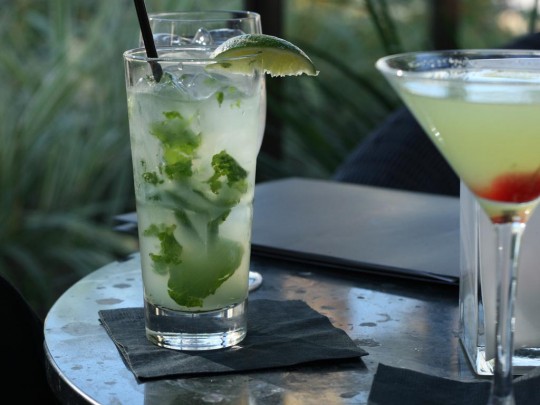 Sarai and I arrived at the Riviera a bit early and met with Kara W., who showed us around the poolside bar area and also Sidebar, an adjoining bar with both indoor and outdoor seating. The three of us took a seat on the patio overlooking the pool and chatted a bit over our first round of drinks. First up for me was a simple Gin & Tonic. Like I said, it was hot, and this sounded like just the thing to cool off with. The Riviera uses their own house-made tonic , and the drink had that wonderful cloudy color you get when you’re not using stuff out of a bottle (it was quite good too). 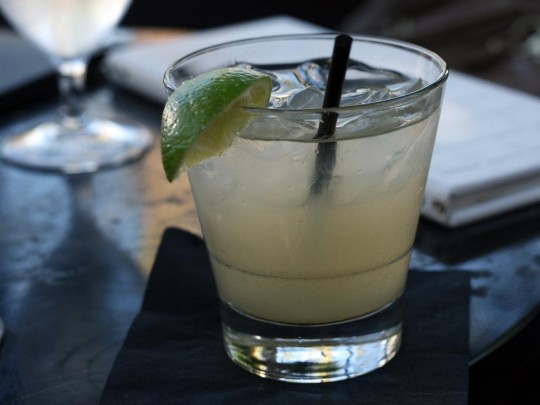 Inside and away from the pool area, the Riviera’s decor was that sort of over-the-top style that you normally only expect to find in Las Vegas, or possibly Disneyland. Shiny oversized furniture, mirror tile-covered walls, lots of stark black and white… sort of like a cross between a Tim Burton film and the Liberace museum. Also not our usual style but, like Las Vegas, it’s probably a great place to visit once in a while. Definitely a lot of fun. 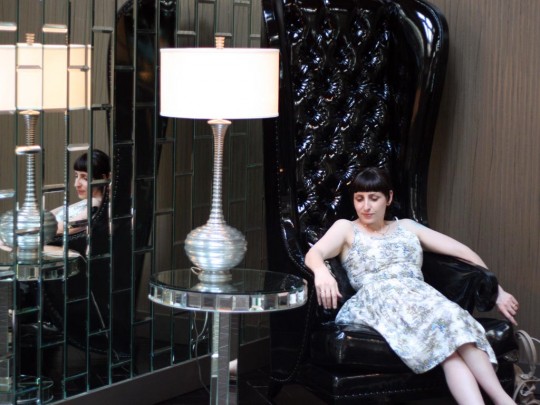 We retired into the the cooler, darker Sidebar for our second round, which for both of us was the house specialty ginger margarita. A common mistake when using something like ginger syrup in a margarita is that, once you add the syrup to the Cointreau, your drink is much sweeter than it should be. You need to do a little balancing work rather than just dumping in the syrup and calling it done. The one at the Riviera was well done, with just the right amount of ginger and enough lime to counter the sweeter ingredients without going too far to the other side.

The interior of the sidebar matched the common areas of the hotel in its predominant use of black, white, and shiny. Unfortunately, the style in here was marred by the big-screen TV that was showing some sort of sporting event, one which had a nearby table full of people hooting and yelling. As sports bars are also not our style, we finished our drinks and moved on to explore more of the hotel. 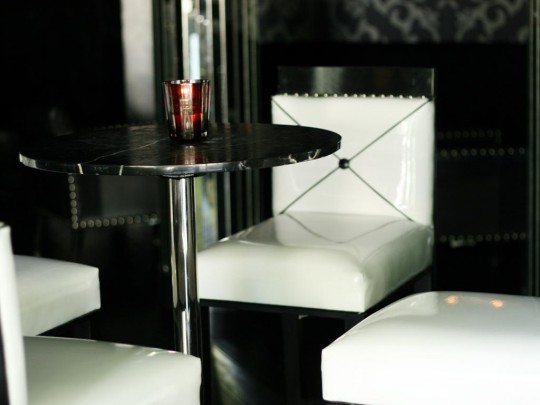 Good cocktail bars are not easy to come by in cities like this, but if you find yourself in Palm Springs, you could do worse than to stop by the Riviera for a round or two. Just make sure there isn’t a game on at the time.

And by the way, if you’re into travel, food, and drinks (as I am), be sure to check out David’s blog for some great writing on all three.

Head over to Flickr if you want to see the Riviera pictures that didn’t make it here.