When I mentioned to Matt Robold that we’d be visiting LA and wanted to try out something new, he was full of great sounding suggestions. A couple rum bars, a mezcal and tequila place, and more. I was just about to pick one at random when he mentioned one new place he hadn’t been yet but Ron Dolette once described as “Clyde Common South”. This was Tasting Kitchen, a new restaurant in the Venice neighborhood in west Los Angeles, and that description alone sold me on it. 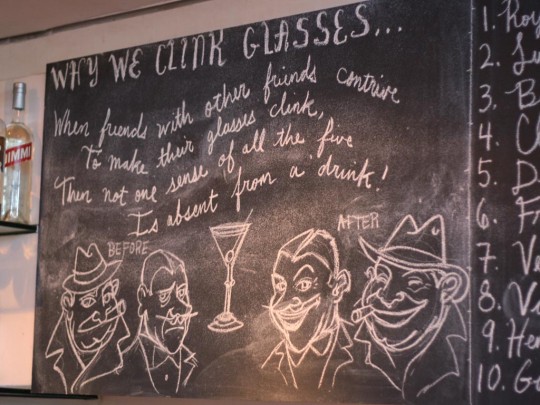 Scheduling was tight on this trip and so the only evening we were free to go out was Friday, which can be a little tricky. Arriving around 7:00pm, there was barely room in the bar but Ron somehow managed to finagle a table for the six of us in short order. The best table in the house, in fact, situated in a small alcove open to the outside. I only ordered our first round at the bar but this was no problem, as the table servers seemed just as knowledgeable as the bartenders about the cocktail menu, spirits, and ingredients. 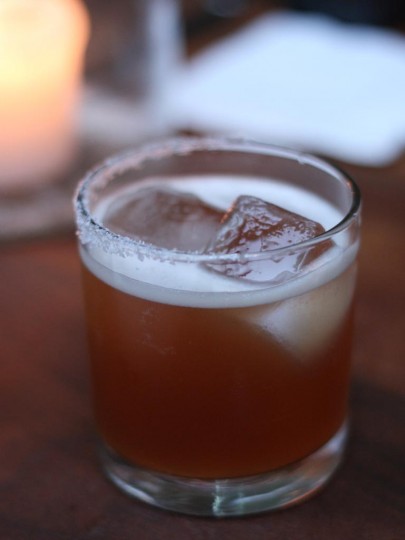 Sarai and I had three rounds each and sampled a good number of the others at the table. Over the course of the evening I had a Royal Bermuda, the Smokehouse, and a Whiskey Paddle. The Smokehouse was my favorite of the three. This combination of mezcal, chinato, and cynar gave this drink a really nice, complex, smoky, bitter flavor that really stood out above the other. Also noteworthy were the Morning Bracer — basically a Last Word with luli in place of the Chartreuse — and Moons over Miami, made with Amaro Nonino, limoncello, mamajuana, and rimmed with salt. This was my first time trying some of these ingredients and it really makes me want to go back on a slower night and sit at the bar so I can taste some of them on their own.

Sarai and I had dinner on our way out and so didn’t try any of the food at Tasting Kitchen, but everyone else at the table did and they all enjoyed it. Especially the bread — the fresh bread and honey looked really good. 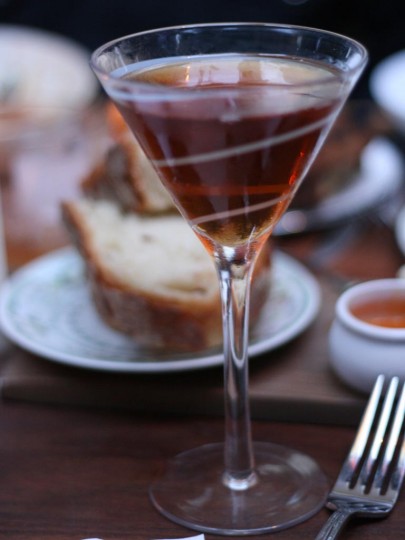 The space has an interesting history. Someone at the table commented that it looked almost like a residential loft converted into a restaurant, and it turns out that was exactly right. We corralled one of the staff and learned that the space was originally an underground reggae club in the ’60s and went through a few transitions from there before being converted into a living space, and then back to a restaurant. Tasting Kitchen took over the space a few months ago. The staff is interesting too: driving the Clyde Common comparison, Tasting Kitchen bartender Justin Pike used to tend bar at both Clyde Common and Clarklewis in Portland before moving south to LA, and a large number of the waitstaff hail from Portland as well.

I don’t get out to the west side of LA very often but I may need to rethink that, as Tasting Kitchen immediately shot to the top of my LA bar list. Some of the downtown places offer better ambiance but Tasting Kitchen has the cocktail menu nailed in a way that the others I’ve been to just don’t match.

Yeah – the trek across town is the only reason we don’t go more often (especially considering how much alcohol is usually involved). Their other bartender, Devin Espinosa, is also pretty good. Haven’t managed to actually go on a night when Justin Pike is working. But it’s definitely near the top of my list at the moment.