We were in Los Angeles all of last week, and I had gone armed with a short list of bars I compiled the week before. My list focused on creative, well-made cocktails, not necessarily popularity, but the two often go together. The Edison, by nearly all reports, had both, plus an amazing ambiance, so it definitely made the list.

So Thursday evening we made the trek from where we were staying in Santa Monica into downtown LA to check out a couple of my finds. I understand downtown LA is undergoing a revitalization in recent years and there are actually some nice bars and restaurants around now, not to mention people actually choosing to live there. As a former LA resident, I can’t imagine this myself, but it does seem to be true. 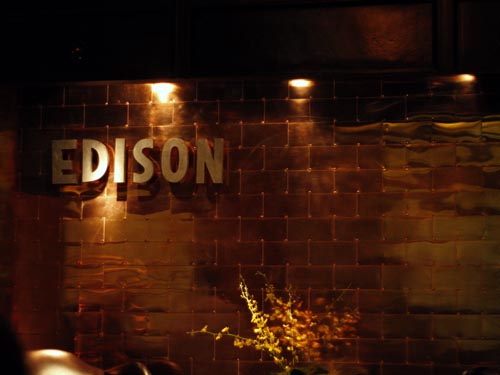 So anyway, we parked downtown in a spot between the two places I had in mind, and then walked over to The Edison, which we found in an alley alongside the old Edison building, the first power plant in Los Angeles. Both the downtown spots I picked out are known for getting pretty crowded, often with a wait to get in, so we were sure to get there early. When we arrived around 8:00pm there was a small group of girls showing IDs at the door and no one else around. So far, so good. We showed our IDs to the doorman who then told me that I’d have to check my bag at the door. What? Yes, I heard him right: “We don’t allow shoulder bags after 7:30″. Needless to say, women were not being asked to check their bags. When I expressed concern over leaving my bag, which contained my camera, iPod, wallet, and other valuables, at the door, he helpfully suggested that I take it back to my car, parked on the perfectly safe and secure streets of downtown LA. We opted to leave instead.

Now, I don’t shop at stores that want me to check my bag at the door and I’m sure not going to drink at a bar that asks me to. At least retail stores have a reason for making this request, however misguided I find it to be. I can only assume that this is part of The Edison’s dress code, but I looked over the bar’s web site beforehand and while they do have rules against hoodies, ripped jeans, and athletic shoes, messenger bags aren’t mentioned anywhere. We met the posted dress code in every way. As for my bag, it’s a simple Timbuk2 messenger bag, black and charcoal grey, in fine condition. So sorry Edison, I think I’ll pass.

At the risk of sounding like sour grapes, I’m not sure it’s a great loss. The decor looks great from the pictures I’ve seen, and the drinks sound even better, this place had a really trendy “LA” vibe, and that just isn’t my style. I’ll take low-key and comfortable over the “beautiful people” any day. This is one of the things I really disliked about LA when I lived there and why I never frequented places like this back then. The Edison’s dress code page (I can’t link to it because their site is all Flash and therefore unlinkable) ends by saying, “We will always strive to more quickly accommodate those who achieve the highest understanding of our dress code”, which translates to “We’ll let you in ahead of the line if we like your outfit”. That really says it all, I think. I’ll stick with places like San Francisco’s Bourbon and Branch, who can give me a quality experience without this sort of contrived exclusivity.

Oh, and the second downtown LA bar I mentioned? That would be Seven Grand, a whiskey bar a few blocks away. Just to top off the LA experience we were having, the night we chose to go downtown was also the one night they were closed for a film shoot. But this one I’ll make another attempt at next time I’m in town. 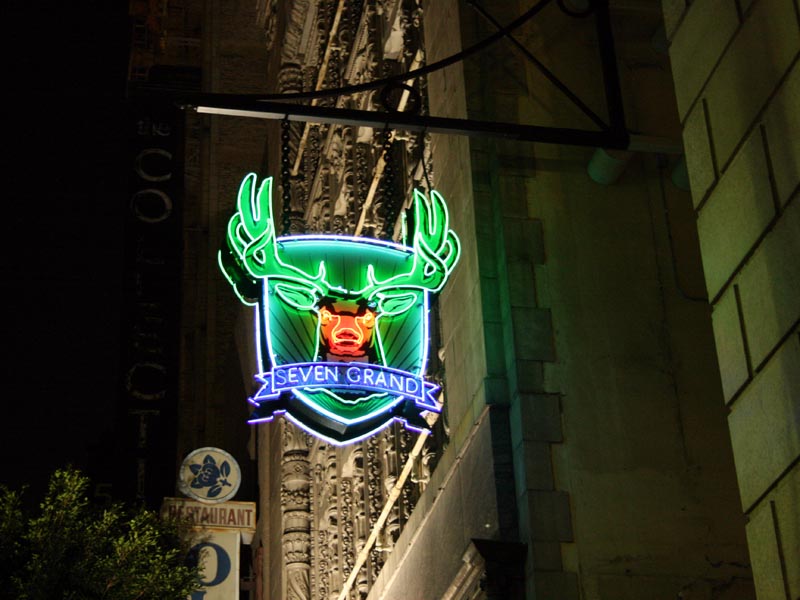 yeah, we went to the Edison last year I think? it was part of a fancy steampunk thing. It was awesome. it WAS beautiful, but it was also filled with the “beautiful” people who where there to see and be seen.
The specialty drinks were fun, I think you’d like ’em.

I wonder what they would have done had you’d handed Sarai the bag? assholes. Have you been to the Broadway Bar? the one right next to the Orpheium? next time you guys are down.. go there!!!

I haven’t been to the Broadway Bar but the first thing I notice when looking it up is that the Broadway Bar web site looks exactly like the Seven Grand site. They’re obviously related somehow so if what I’ve heard about 7G is true, Broadway might be worth checking out as well. Plus, I love art deco, so the decor of Broadway is a definite plus.

yeah, I think that the guy who actually owns seven grand owns the broadway also. I’d seen them mentioned in LOS ANGELES magazine, prolly about a coupla weeks after we’d been there. it was the bar issue. The upstairs had a lil’ new Orleans feel to it, in that it had a narrow balcony. Plenty of seating, nice and dark inside.