I spent last week in Los Angeles and had a chance to meet up with some LA friends for a drink. While my first thought was to meet at Seven Grand, I realized that there are still bars in LA I have yet to try and so I should take the opportunity to try something new. When I heard about a new speakeasy-style place called Varnish hidden away in the back of Cole’s restaurant downtown, I knew I had found my bar for the trip.

Hidden away is right. From the outside, Cole’s looks like any other downtown bar/restaurant but there’s no outward indication that anything special is going on there. Upon entering you’ll see a pretty typical place, with a bar to the right and tables straight ahead. But if you continue walking toward the back of the restaurant you’ll see a nondescript door with a small picture of a cocktail glass on it. Herein lies Varnish. The door is unlocked at 8:00pm and you can walk through into a very different sort of place from Cole’s up front, decorated in the turn-of-the-century style that’s de rigueur for speakeasies.

I’m a sucker for this type of thing so the this much alone would have sold me on Varnish but the real achievement was the bar. The bottle selection visible on the shelves was comprehensive and the bar area itself was amazing. Ice stations filled with dishes of fresh citrus, berries, and herbs; round-bottom flasks filled with juices and syrups; misters for absinthe and rose water rinses… All this made for an impressive display that somehow didn’t clash with the decor of the rest of the room. 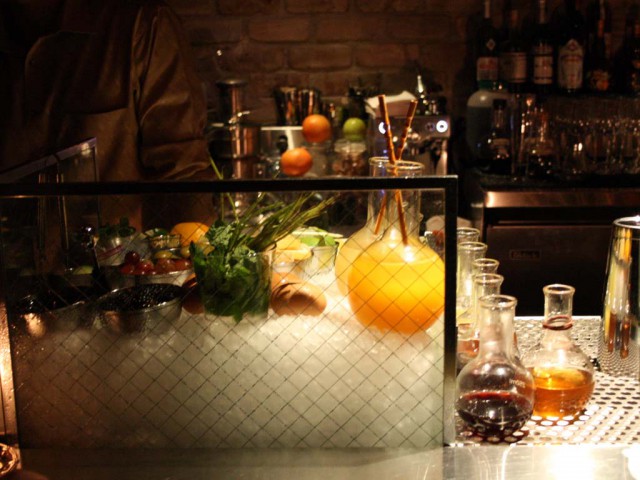 The bartenders were fantastic as well. I’ve never waited so long for a single drink to be made but I’ve also never enjoyed the wait so much. They didn’t have table service on the Monday evening we went so we ordered at the bar and watched the bartenders construct our drinks with meticulous care. The spirits were measured carefully, stirred thoroughly, and allowed to chill in the mixing glass for a bit before being strained into our glasses. The ice used for mixing was hand-cracked from large pieces kept behind the bar and drinks served on the rocks were presented with a single large chunk of ice chipped to fit perfectly into the glass.

A short menu of half a dozen cocktails was presented along with the “Bartender’s Choice” option, where they will mix something up based on your stated preferences. I opted for this, asking for something interesting with Rye and tending toward the bitter and complex. I was presented with a *Little Italy*, a drink I was unfamiliar with, made with rye, sweet vermouth, and Cynar. The bartender took the time to explain the ingredients and their origins, and was generally very willing to talk about what he was doing with me and others standing around the bar as we ordered subsequent rounds.

After this first drink, I had a Remember the Maine and a Sazerac. Jojo tried their signature cocktail, the *Palma Fizz*, made with vodka, lime juice, ginger syrup, rose water, and club soda. 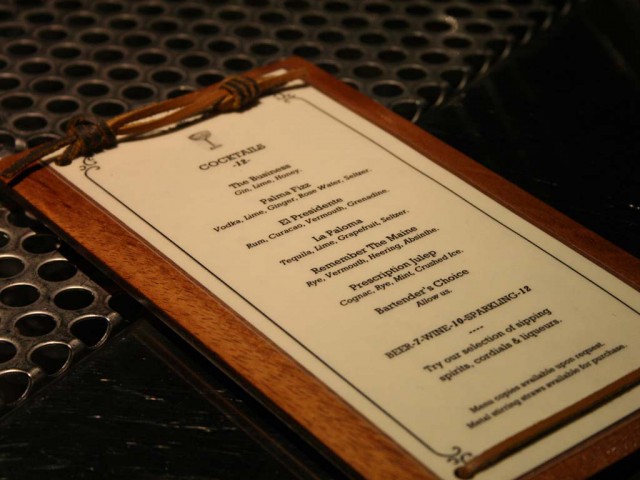 I sound like I’m really gushing here and while it’s true that I was very impressed by the entire package, not all was perfect. The music started out with great 1920s-era jazz but this was soon replaced by a live piano player. In theory this could have worked very well with the theme but the piano was much too loud for the small space, even to the point where conversation was difficult. Good idea, but a flawed implementation. I don’t know if this volume is normal or not but moving the upright piano against a wall would help to dampen the sound and would probably improve things quite a bit.

An article about Varnish appeared in the New York Times last June and it’s been mentioned in a number of other places as well, so plan your visit accordingly. I understand it can get pretty crowded on weekends but it was pretty manageable on the Monday night we went. Varnish is a collaboration between 213, who own some other great bars in downtown LA, and the minds behind NYC’s Milk and Honey.

Are you the bartender I gave my card to at the bar, or the other bartender on duty last last Monday evening (Aug 17)?

Hey there, I was the other bartender on duty. I was actually running the floor that night. Making sure the ship didn’t sink so to say. Thanks for stopping by!

Hey guys, Just to clarify, 213 is the management company, but Cedd Moses, owner of 213 is part owner of the Varnish. He has partnered with Sasha and Eric but he himself is also part of the owning team. 213 designed, built and employs Varnish. With that in mind, 213 does operate and partially own. FYI.

Wow, this is getting confusing! Thanks for clarifying, Scotty. I hope my new closing line accurately reflects things now.

Couldn’t have said it any better myself. Thanks Kenn!

This sounds like such a good bar! I am so jealous – provincial Britain has nothing so good to offer (obviously)…

Odd that you mention the Sazerac – I made my first one on Monday, after acquiring some rye and Peychaud’s Bitters at the weekend. It was a bit of a hack, having no absinthe or herbsaint on hand (I used Elixir Vegetale, a very strong Chartreuse), but I still enjoyed it a great deal.

Kenn, I guess Monday is the day to go. I was there on Friday with a large group of over 40, apparently my fault (at least that’s how the staff made it feel). Ultimately, only about 15 ever got in. We have never encountered so many rules! To the point where we were told that we could not stand to talk with our friends at the other tables, and the bar was less than 1/4 full! I will agree that the drinks were good, my Manhattan was great, but it is odd that they would shut out a group of people willing to pay for this experience which you described. Most of my friend simply left when they couldn’t get in… remember that the bar was less that 1/4 full. It’s an odd business model in a recession, and they have little hope of getting any of us back.

And in regards to the “de regueur, turn-of-the-century style” for speakeasies: the wood paneling, flocked wall paper and amber crackle glass faux gas sconces are c.1972. Clearly a case where the mood lighting of the club greatly benefitted the decor. And of all people, you should know that speakeasies only existed during America’s Prohibition, 1920 – 1933, not at the turn of the century!

I actually appreciate bars that don’t want crowds of people standing around. That’s fine at most bars out there, but a few places like Varnish are going for a quieter, low-key environment and crowds of people around all the tables just doesn’t work with that. And frankly, a group of 40 people constitutes a _party_, not just a group of people going out to a bar. I’d be hard pressed to think of a bar in any city that could accommodate a group of that size on a Friday night.

Of course actual speakeasies only existed during prohibition but, in my experience, the prevailing style of these sort of places ranges from turn of the century up through the 1920s and ’30s. But thanks anyway.

Many bars can and do accommodate large groups. I know this because the Art Deco Society of Los Angeles does this on a monthly basis with its “Cocktails in Historic Places” events. For four years we have been meeting all around Los Angeles, Santa Monica, Long Beach etc.

While I understand your desire for quite places to drink and love of mixology , I too share in this, separating people by slamming a door in their face with no explanation speaks less of exclusivity and more of rudeness.

The vast majority establishments where we have held our “CHP’s” have been thrilled at our presence and indeed many of them have welcomed us back and some have even provided appetizers gratis.

After leaving Varnish some of us went to another location nearby where, upon hearing of our treatment at Varnish, the owner presented all 11 of us with Champagne. Now THAT is how you establish customer satisfaction and assure repeat business!

The pictures are just to die for! I come from a small town and can’t imagine a fun little place like this.. I really must visit. The fresh veggies and fruits for drinks look divine!

[…] I love Church & State. The food is delicious. I love going to Varnish. I like places that deliver a great product, that also pride themselves almost 50% in the actual […]

check out my recipe for The Business cocktail from The Varnish here:

this guy clearly has no idea!!!!! could you make 40 manhattens at the same time ? no then you should not expect to walk into any respectable bar of restaurant and expect them to keep up the quality. Good on them !!!!