Despite the fact that New York City is one of my favorite US cities to visit, I’ve somehow managed to not have any reviews for bars there. So on a recent trip I made a point of getting out with the express intent of writing reviews. We were only there for a few days, and so barely scratched the surface of what NYC has to offer, but it’s a start. I guess I’ll just have to keep going back until I’ve covered them all (but sadly, I couldn’t make it back this week for the Manhattan Cocktail Classic).

We wanted to hit a few places in Brooklyn, as well as in Manhattan, so our first stop was to be The Hideout, just a couple blocks from where we were staying in Ft. Greene. We gathered up Rob and Sarah, the friends we were staying with, and @willhaus from Swayspace, and headed over there around 10:30 our first night in town, only to discover they were closed. Closed for the evening? Closed permanently? Or maybe just taking the speakeasy thing to its logical end? We had no idea. Our NYC hosts hadn’t been there in a while and so they didn’t know if something had happened either. 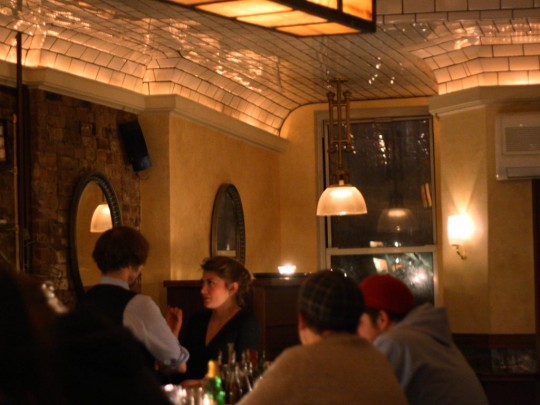 Ok, plan B then: Weather Up, another place we’ve heard great things about, and that’s located only about a mile from where we were. We walked over there to find a really great space done up in subway tiles and brick, with a nice looking bar and a cocktail menu heavy on the classics. No empty tables, alas, so we grabbed some counter space toward the back to set up camp and peruse the menu. I started with a Harvest Sour, as did Rob and Willy, which was a really nice drink made with rye, applejack, lemon, simple syrup, and egg white. The fact that Weather Up was serving drinks with egg white despite the recent problems NYC’s Pegu Club had with the health department over this surely played a part in my decision to try this one. But no salmonella was to be had, just a very nice, smooth cocktail. 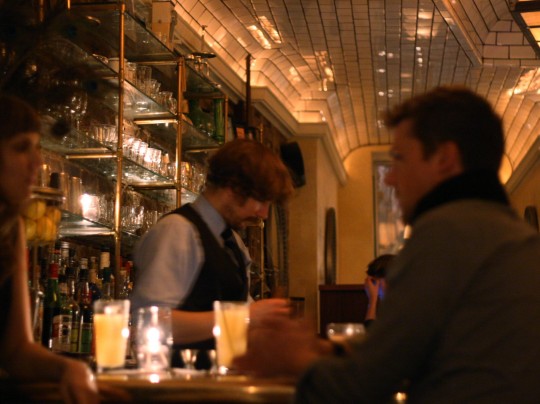 The bar started to empty out a bit shortly after our arrival so we were able to grab the big table at the front of the bar for our second (and third) round. I had a bit of trouble deciding on something for my second round and so asked for something “with bourbon or rye, on the bitter side” (sounds like I was channeling Lindsey here). A short time later I was presented with a Paper Plane, a drink hailing from NYC’s Little Branch and made with bourbon, Campari, and lemon. Upon further research, I found recipes for this using Aperol and Amaro Nonino in place of the Campari I was served. I’d like to try one this way but the one I had was just fine too. 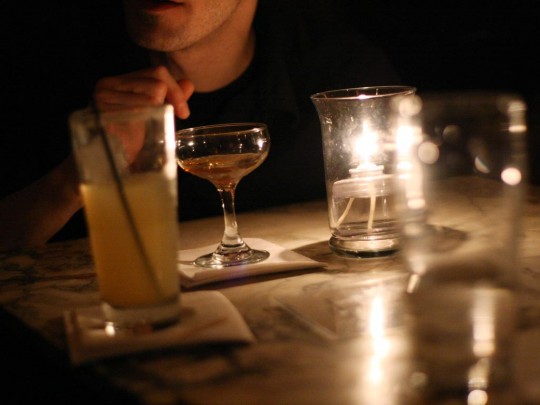 Our party tried a number of other things, but the only one that stands out now was Sarah’s Bourbon Highball — bourbon, lemon, ginger, simple syrup, soda — which was served with an impressive ice spear. The ginger came as a surprise, it was omitted on the menu due to a typo, but was a really nice addition.

[…] hotspots like Little Branch and The Back Room, so the sign-less, sleek, white-tiled entrance of Weather Up had the subtle, cool vibe to match our […]