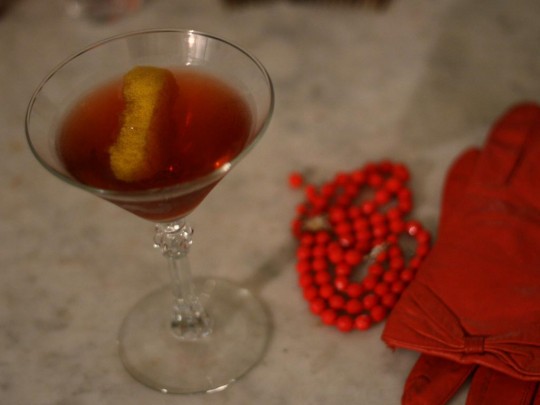 Combine liquid ingredients in an ice-filled mixing glass and stir until cold. Strain into a cocktail glass. Squeeze your lemon zest over the surface of the drink, run it along the rim, and drop it into the glass.

I’m drinking a Boulevardier because I was originally craving a Negroni but found myself out of gin (!!!). Now I’m sure most of you would consider this to be the most serious of crimes, but I personally rank it second to running out of either bourbon or rye, both of which I have on hand in ample quantities. So let’s swap one of those for the gin, bump up the proportion a little, and voilà, we have the Boulevardier.

Campari can be a bit overpowering, so I find this cocktail works best with a base that can stand up to it easily. I using Rittenhouse 100 rye, which does a great job. Swap in your favorite bourbon to make a cocktail more faithful to the original recipe, as written by Harry McElhone in Barflies and Cocktails.

Oh, and that gin I’m out of? It’s on my shopping list, first thing tomorrow.