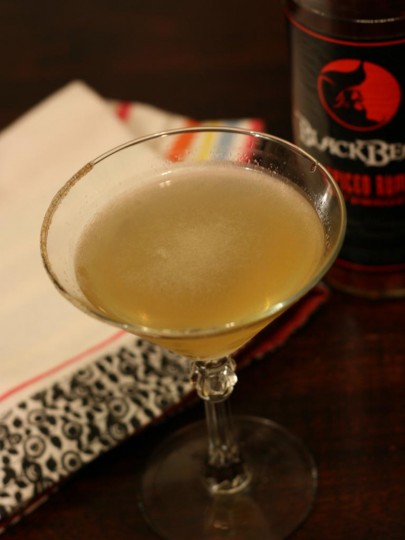 Combine ingredients in an ice-filled shaker and shake until cold. Strain into a chilled cocktail glass, with an optional cinnamon-sugared rim.

The Cable Car, created by Tony Abou-Ganim at San Francisco’s Starlight Room, is a variation on the classic Sidecar, using spiced rum rather than Cognac, and cinnamon sugar instead of the regular sugar often used on Sidecars. It has quite a different flavor and is a nice addition to the ranks of spirit-orange-citrus cocktails.

I’m not normally a fan of sugar-rimmed cocktails but a little cinnamon compliments the spiced rum nicely. Go easy though — rather than dredging the entire glass rim through your sugar, try doing just a quarter or so of it. You can see just a touch of sugar on the left side of the glass in this photo. This allows you to dip into the sugar now and then, while not overly-sweetening your cocktail.

To make cinnamon sugar, just add 1 tablespoon of cinnamon to a cup of superfine baker’s sugar (not confectioner’s sugar — baker’s sugar is regular granulated sugar, but finer). Optionally, spice it up a bit more by adding 1 teaspoon nutmeg, 1/2 tsp ground clove, and 1/4 tsp allspice after the cinnamon. This spiced sugar is what I used here and it worked very well. But again, moderation is key; don’t go overboard with it.

The rum I used in this cocktail is a new(ish) product that was sent to me by the fine folks over at Don Q. Blackbeard is a spiced rum in the vein of products like Sailor Jerry or Captain Morgan. While vanilla is a strong element in the the aroma and flavor, it doesn’t come across as strongly as it does with these others. While the vanilla is definitely there, the scent is more like a typical aged rum than a bottle of vanilla extract. Upon tasting, it hits a nice middle ground — a bit smoother than Sailor Jerry and not nearly as sweet at Captain Morgan.

While Blackbeard works well in the Cable Car, I got a better feel for it when I tried it in a hot toddy, which is also more appropriate for these cold winter months. Add a cinnamon stick and a couple whole cloves to a couple ounces of Blackbeard and top with hot water and a touch of honey, and you’re set.

They make a great Cable Car at the Petrossian Bar in the Bellagio Hotel in Las Vegas. Dink was our favorite bartender there. We hired him to tend bar at one of our parties in southern California. He loved to whisper to guests who praised his repartee, “You can teach a monkey to mix a drink, but you can’t teach the little fu*ker to talk…”