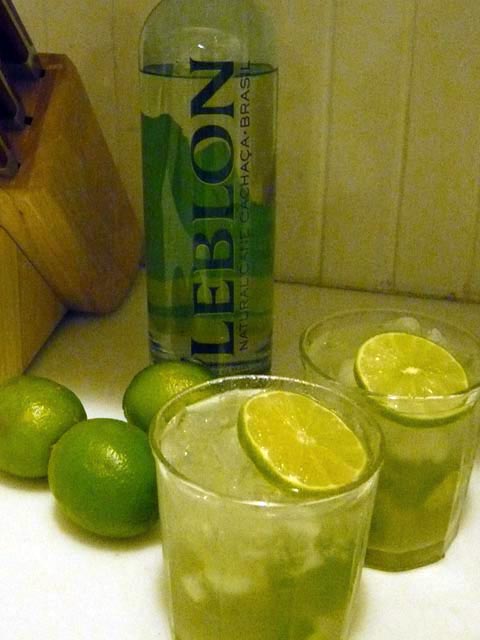 Cut the lime in half crosswise, and then cut each half into quarters. In an old-fashioned or other medium-sized glass, muddle the lime pieces with the sugar to release the lime’s juice and begin to dissolve the sugar. Add the cachaça and crushed ice and shake in the glass that will be used to serve the drink to combine all the ingredients. This is one of the few cocktails that is served with the same ice with which it’s been shaken. Garnish with a lime wheel.

This was interesting. Not only is this a cocktail I’ve never had before making these, but it uses a base liquor I’ve never had, cachaça. Cachaça is a Brazilian spirit similar to rum, made from sugarcane juice. The Caipirinha is the national cocktail of Brazil and has been named by the International Bartenders’ Association as an “official cocktail”, which means it’s one used in the annual World Cocktail Competition.

This drink was pretty good. I was a little wary of the amount of sugar in each one but it cut the lime’s tartness nicely without making the entire drink too sugary, although there was a bit of a sludge in the bottom of our glasses once the drinks were finished. I may experiment with the amount of sugar next time, or substitute simple syrup. We paired these with a Jamaican curry made with pumpkin, sweet potatoes, assorted squash, and plantains.

For a refreshing variant, try a Cherry Caipirinha when cherries come into season in summertime.

Cocktail recipe from The Art of the Bar.

Here in Brazil, we also have different versions for caipirinha. We also do it with vodka, and we called it caipiroska. We prepare the caipiroska with different kind of fruits like passion fruit, strawberry, pineapple and others, we also mix them all. A second version is done with sake, the same way as with vodka or cachaça, mixing the fruits with sugar (some women put sweetner) and adding ice. I love it with different berries.

here in Brasil, we have it with sagatiba.

Valeska: I’ve made variations of these with cherries, blackberries, and orange, in addition to the lime. It seems like there’s a lot you can do with something like this.