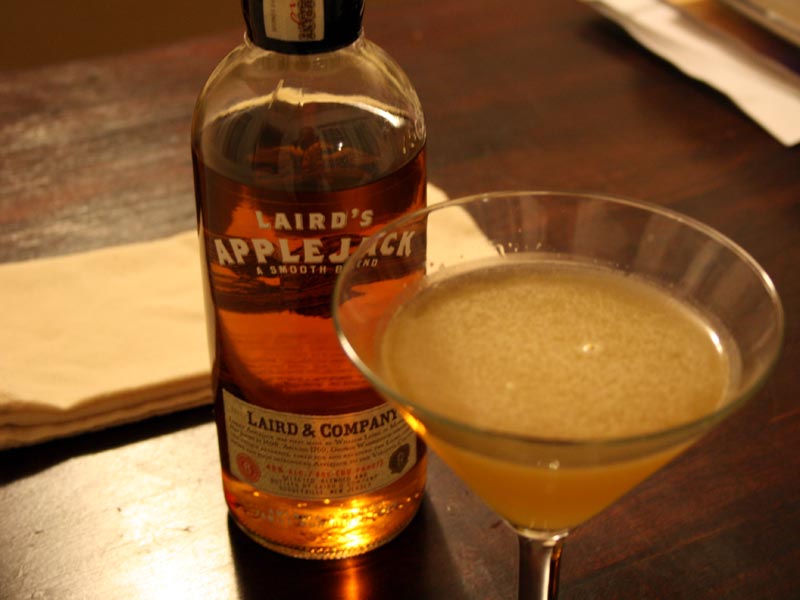 I know, I know, that’s applejack in the picture, not Calvados. I ran out of Calvados a couple weeks ago and picked up the applejack just to have something a bit different. Both applejack and Calvados are apple brandies — the former American and the latter French. The French Calvados is generally considered superior but they’re close enough for most recipes, so you can usually substitute one for the other.

Combine all ingredients in an ice-filled shaker and shake until cold. Strain into a chilled cocktail glass.

I’ve been into Calvados lately as the weather turns colder and I’m on the lookout for other good recipes using it. This one is nice, but needed something. I used one dash of orange bitters making it, an amount which I’ll try increasing a bit next time to give it a little more edge.

I found this recipe in Gary Regan’s The Joy of Mixology, and he credits the 1977 and out-of-print Jones’ Complete Barguide for the source recipe, which he modified slightly a bit for his own book. Despite my use of Applejack in this version, it should not be confused with the similar Apple Jack Cocktail Dale Degroff lists in The Craft of the Cocktail, which he got from Frank Meier’s The Artistry of Mixing Drinks, circa 1936.

Shake all ingredients with ice until cold and strain into a chilled cocktail glass. Garnish with a thin slice of apple and a strip of orange peel.

As well as making the Calvados Cocktail with Applejack, I’ve also made the Apple Jack Cocktail with Calvados in the past. I think I prefer the first over this one; the orange and lemon juices compliment the apple brandy a bit better than the lime.