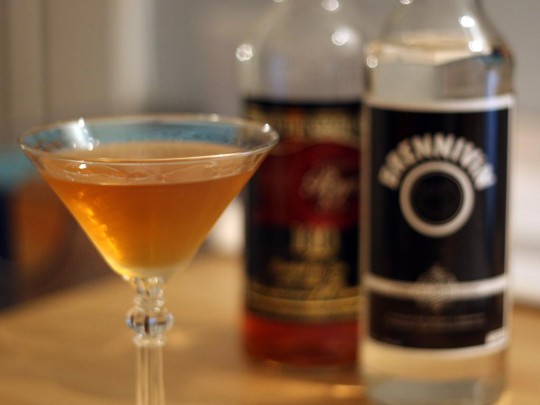 Combine ingredients in an ice-filled mixing glass and stir until cold. Strain into a chilled cocktail glass.

First of all, I realize this is my first post in nearly three weeks. My only excuse is that planning and organizing CocktailCamp PDX is taking far more of my time and energy than I anticipated. But it’s only a week and a half away now and it’s shaping up to be a great event, so I hope all my readers here in Portland picked up tickets before we sold out.

Anyway, back to the drink. The name Carra-ryed Away is a play on caraway and rye, the two main flavors in this cocktail. The caraway comes from aquavit, the Scandinavian spirit named after aqua vitae, the water of life (see also: eau de vie). I don’t have any aquavit on hand but I do have Brennivín, the Icelandic version of the same that I picked up on a trip to Iceland a few months back. That’s close enough, right?

So how does it taste? At first glance, this looks like a god-awful combination of ingredients, and you just might be right. It tastes better than it sounds but I’m halfway through the one I mixed for myself and I’m still not sure if it’s growing on me. It’s drinkable, but not something I’m likely to make again.

Coincidentally, we had lunch today at Broder, a great Swedish restaurant in our neighborhood. I was admiring their aquavit selection while we waited for a table and mentioned that we’d have to come back some evening for a tasting (I say that every time we eat here).

I found this recipe in Food & Wine Cocktails 2009, the annual cocktail book published by Food & Wine magazine. While I usually stay away from cocktail books like this, there’s actually some pretty good stuff in this series (that being said, I checked it out from the library rather than buying it). The recipe is credited to Jeff Grdinich (no, that’s not a typo) of White Mountain Cider Co. in Glen, New Hampshire.

The Food & Wine Cocktail series has some good gems in there (we only have the 08 and 09 editions) which isn’t surprising considering they solicit recipes from some good bars and bartenders.

We’ve had rather good luck with Jeff’s recipes and had the pleasure of meeting him several times.

This drink is better with less Amaretto and Grand Marnier, or rather, with lots more Aquavit and rye, and a dash of Peychaud’s Bitters. OK, so I should give it a new name. I’ll work on it.

I think you’re on the right track. Let us know what you come up with!