Yes, you read that right. A Cosmo. 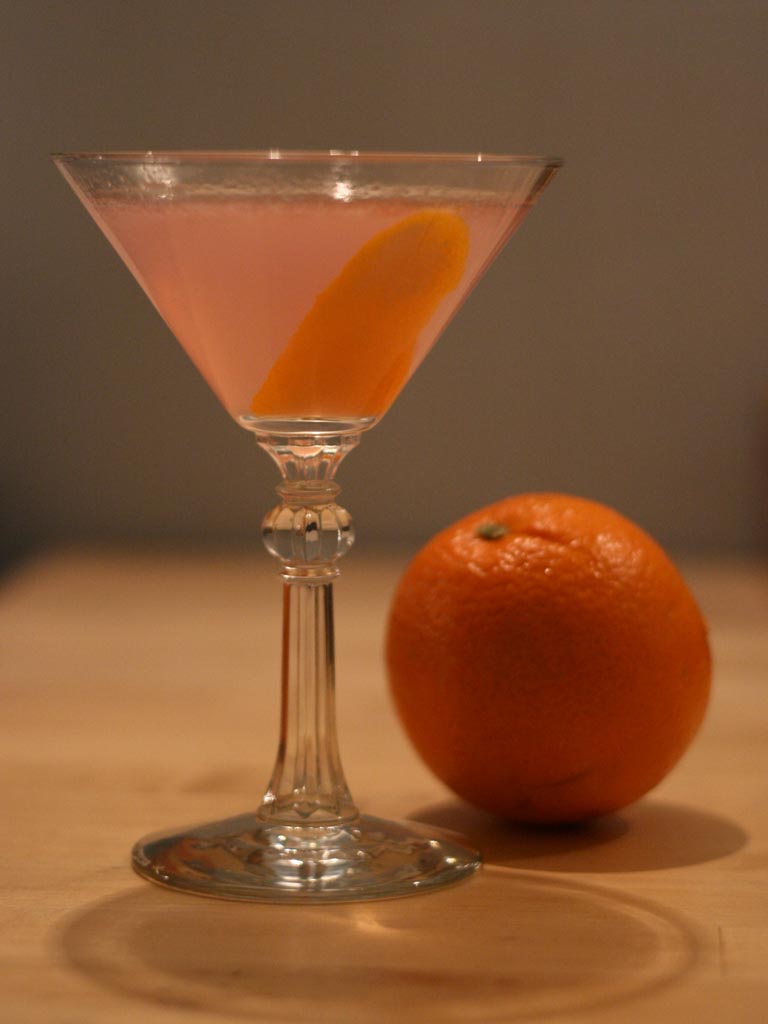 Combine liquid ingredients in an ice-filled cocktail shaker and shake until cold. Go easy on the cranberry juice; it’s mainly for color, and not a major ingredient. Strain into a chilled cocktail glass. Flame the orange zest over the surface of the drink and drop into the glass.

The Cosmopolitan — the often disparaged cocktail of the Sex and the City set. But you know what? It’s actually a perfectly respectable cocktail. It’s not to my tastes, exactly, and maybe I wouldn’t order one in a bar, but if you look at what goes into it you’ll find it’s in very good company. Drop the cranberry juice and it’s nearly identical to any number of well-loved cocktails. Make it with Tequila and it’s a Margarita. Substitute gin and add bitters and you’ve got a Pegu Club. It’s even quite similar to whiskey cocktails such as the Oriental. Use lemon instead of lime and you’ve got lots of other great drinks, like the Sidecar, and on, and on.

For this one I used an airline bottle of Absolut Citron I’ve had sitting around ever since Sarai got it at her work xmas party last year. I always keep vodka on hand, even if I rarely drink it, but I have no use for flavored vodkas so I’ve been wondering what to do with this thing. Be careful with your cranberry juice, as most of the ones in your supermarket are laded with high-fructose corn syrup. For this drink I picked up a bottle of Lakewood organic cranberry juice, which doesn’t contain any of that garbage. I opted for the blend rather than the pure cranberry because it’s a little easier to mix and is available in a smaller bottle (I don’t use much cranberry juice either).

So while you may not drink these yourself, think again before sneering at someone who does. Even if it’s the only cocktail they know, it just may open the door to a wider world.

Sure, the Cosmopolitan is just a sour with a splash of color. But the thing that I find that makes it stand out is that when it’s done right (when it isn’t too sweet), the cranberry and lime juice combine to become slightly salty, just enough to keep me interested.