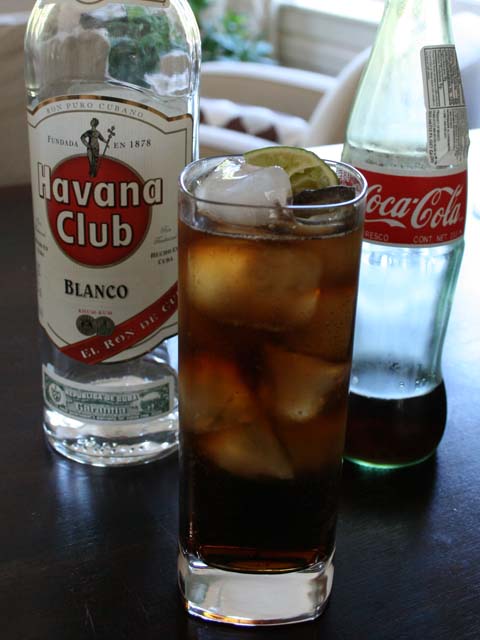 What better use for the Cuban rum Thatchery gave me than Cubas libres?

Pour two ounces of rum (Cuban, if possible) into an ice-filled highball glass. Fill with Coke and squeeze in a lime wedge.

Keeping with my utter dislike of anything containing high-fructose corn syrup, and not being a Coke drinker anyway, I wasn’t all that excited about making these. But then I remembered that Mexican coke is still made with cane sugar rather than the HFCS they give to Americans. I did a little looking around and found that my neighborhood taqueria sells Coke imported from Mexico instead of the domestic variety so I picked up a couple bottles. Fitting for a drink with a Spanish name, I thought, not to mention slightly less unhealthy.

Even as someone who doesn’t like Coke, this drink is pretty good. The lime helps cut the sweetness of the soda, and the use of Mexican Coke means it doesn’t have that gross chemical taste that domestic Coke has. It’s not something I’m likely to make regularly, but I did enjoy this one.

I knew there was a reason why the Cokes I’d get at the Mexican place up the street from my old apartment tasted so much better. No HFCS. Amazing.

and I always ask for rum and coke with a slice of lime ;)