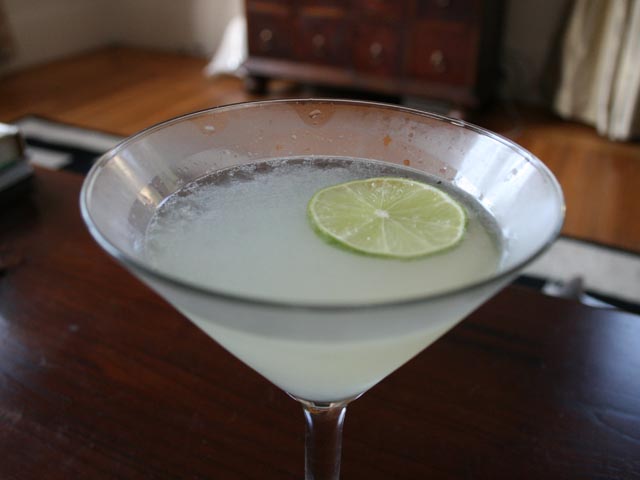 Combine the liquid ingredients in an ice-filled shaker. Shake until cold, and then strain into a chilled cocktail glass. Garnish with the lime wedge.

I’m not normally a fan of apple vodka. I’m not familiar with Citadelle but I’ve had a bottle of apple Smirnoff sitting in the back of the liquor cabinet for years and I never touch it. I wouldn’t normally drink regular Smirnoff vodka at all, and I really dislike their sickly-sweet flavored varieties, but this bottle was part of a case of Smirnoff I got free back in 2003 and it’s been gathering dust since. I dug it out for this recipe because it sounded like it could be interesting.

Being unfamiliar with the apple vodka this recipe calls for, I can’t judge how sweet this drink is suppose to be. On the one hand, it’s got lime juice which will offset some sweetness, but it’s also got a dash of simple syrup as well. I do know how sweet this Smirnoff is though so I made a decision up front to skip the sweetener. Otherwise following the recipe, it was still too sweet for my tastes and only by doubling the lime juice to one ounce did I get a good balance. Once I did, though, this drink actually isn’t half bad. It’s still a bit sweeter than I normally like, but the added tartness from the lime gave it a more interesting flavor.

“I wouldn’t normally drink regular Smirnoff vodka at all…”

Really? I think Smirnoff gets a bad rap. Possibly because it’s actually affordable and they’ve branched out into all that flavored stuff (as well as some very specious “twists” and whatnot). Nonetheless, I think it’s actually pretty good stuff. I believe it’s been in Bond movies, though not the books. But really what matters is the taste, and it holds its own.

Personally, I prefer Polish vodkas. Of the potato variety.

I drank regular Smirnoff when I was younger but stopped as soon as I could afford better stuff. My dislike for it in general probably has a lot to do with that; I haven’t had it in years so I can’t really make a quality comparison now. My distaste for their flavored varieties is self-evident: It’s way too sweet for my tastes.