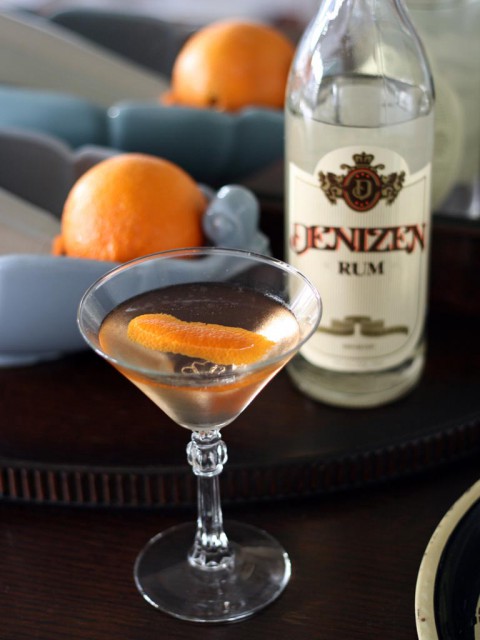 Combine ingredients in an ice-filled mixing glass and stir until cold. Strain into a chilled cocktail glass. Optionally garnish with an orange zest and piece of pineapple.

The El Presidente was created in Havana in the 1920s and is reportedly named for General Carmen Menocal, the president of Cuba before Batista. It’s one of those drinks you’ll see made a little differently each time. This particular recipe was suggested by the team at Denizen Rum, who also supplied me with the bottle seen above, and it was further slightly modified by my use of BG Reynolds Hibiscus Grenadine instead of regular. An extremely minor change, that, only done because that’s the grenadine I happen to have on hand (and really, who needs more than one bottle at a time?).

I tried versions of this cocktail using both bianco vermouth and the dry vermouth found in the original recipe (both Dolin). When using dry vermouth, the drink benefits from increasing the amount of rum by 1/4 ounce or so, but it works well either way.

As for the rum, Denizen is a new silver rum, introduced in New York around this time last year and now starting to make its way out across the country. It’s aged two to five years in oak, then charcoal filtered so the finished spirit is perfectly clear with a nice smooth finish. At $16 it’s a great option for your general-purpose silver rum.

I have it on good authority that Denizen also makes a good Negroni variant, using it in place of gin. I’ve done that with Novo Fogo silver cachaça but never rum, so you may see another Denizen cocktail post coming up soon.