This cocktail is an adaptation of the Gin-Gin Mule served at Pegu Club in New York, which itself is an adaptation of the Moscow Mule, using gin in place of vodka and adding mint. Great idea, I say. The Moscow Mule is a tasty drink but I prefer gin to vodka and mint works great with gin and ginger (this combination is also seen in the Ginger Rogers cocktail). The extra “gin” in the name of this one comes from my using ginger simple syrup in place of regular. 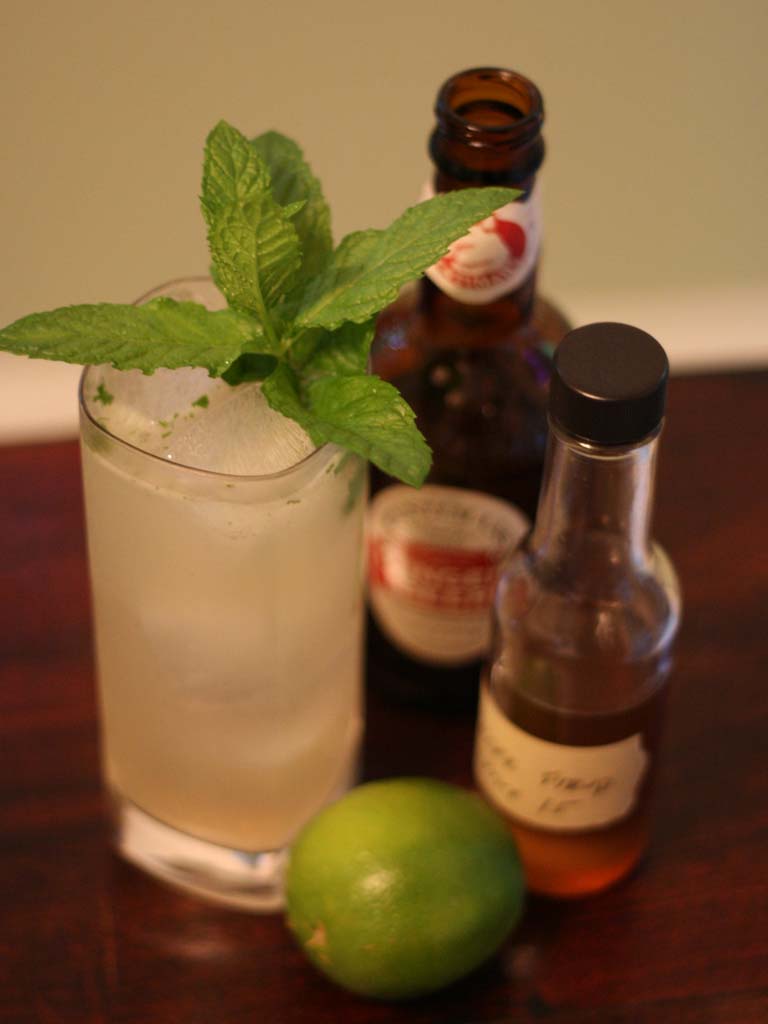 Muddle the mint leaves with the lime juice and simple syrup in a mixing glass. Add ice and gin and shake until cold. Strain into an ice-filled collins glass and fill with ginger beer. Garnish with a mint sprig.

Ideally, this should also be made with homemade ginger beer but time constraints and convenience made me go with Fentiman’s Ginger Beer instead. I made the ginger syrup this afternoon using the recipe from The Art of the Bar, which I wrote up last September. I found a number of recipes for the Gin-Gin Mule and none of them seemed quite right, so I improvised my own recipe, which you see above. It came out pretty well, especially refreshing on a hot day like today, but I think I might play around with the proportions a bit next time.

I made this today because ginger is this month’s Mixology Monday theme. This is my first time participating in this but it’s a fun idea so I’m sure I’ll be doing more. Every month someone picks a theme and participants blog about something related to that theme, usually a drink recipe but not necessarily. The posts are then rounded up on the web site of the “host”, which also changes every month. This month’s host is RumDood.

I haven’t been to Pegu Club yet but it’s on my list of places to check out next time I’m in NYC (hear that Rob, Sarah?).

I made myself a Gin-Gin Mule just last night, using Fentimens. Funny that I wound up today seeing your post on it. I love Fentimens’ Tonic, but find the Ginger Beer a bit weak in spice, and carbonation. So far, my favorite for this drink has been the crisp and spicy Goya Jamaican Ginger Beer.

As for Pegu Club. Ah, it is a love affair. I’ve been to all of the usual suspects in the city, and I feel like I am cheating each time. So while I may wander out for some strange, it is Pegu Club that I always go back to, and is always the best.

OK, so on my way home last night at 10pm I decided I wanted to make a Cocktailia cocktail – something with gin. The only store open being Vons, I knew I’d probably have to make some feeble ingredient substitutions. Vons doesn’t carry ginger beer so I had to settle for Hansen’s Ginger Ale (its pretty gingery and has no HFCs.) I could have made ginger simple syrup, but I was too impatient.

Anyhow… the result was quite tasty – the gin, ginger, lime, and mint was a delightful combination and I can’t wait to make this drink again with the all the proper ingredients.

[…] make a cocktail called the Gin Gin Mule. Kenn from Cocktailia brings us his adaptation: the Gin-Gin-Gin Mule. When in doubt, add another gin I always say. Gin, ginger syrup, lime, mint, and ginger beer? Sounds like a winner to me! […]