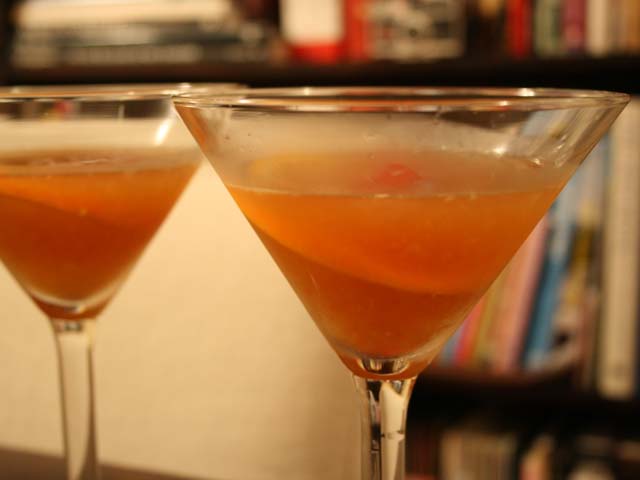 Shake all the ingredients well with ice and strain into a chilled martini glass. Garnish with an orange slice and a cherry.

Let me begin by saying that this drink is not good. It’s rare that I don’t finish a drink I’ve made but this was one of those times. I think the problem is that this recipe is from 1930 and they made their cocktails sweeter then than we do now. One of the things I like about The Art of the Bar is that it features cocktails inspired by the classics, and doesn’t necessarily include the recipes as they were made originally. Tastes change over time and a lot of older cocktail recipes are too sweet for the modern palate. This recipe is from The Craft of the Cocktail, which generally does not update them similarly. I should have paid a little more attention to the proportions as I was making it. Live and learn.

I’ll confess at this point that the recipe itself didn’t really interest me all that much. I just made it because I like the name.

I love your cocktail recipes and I am astounded to find that there is a Golden Dawn cocktail. This is a drink that warms my heart as well as my tummy