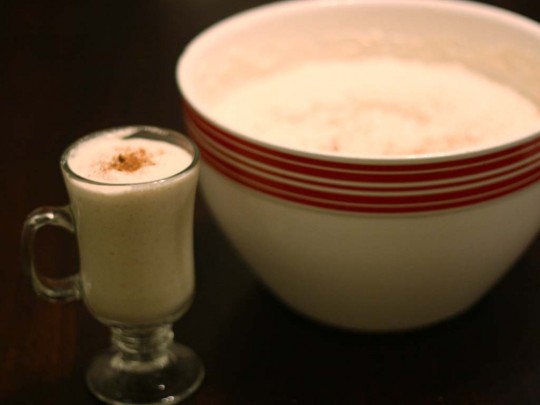 Carefully separate the eggs, placing the yolks in one large mixing bowl and the whites in another. Mix egg yolks with a electric mixer on medium to combine. Add powdered sugar and spices and continue to mix until blended. Stir in the bourbon, rum, and brandies, followed by the milk and cream.

Wash the mixture off the beaters, then beat the egg whites in their own bowl until soft peaks form. Fold egg whites into the egg yolk mixture and whisk until evenly blended. Pour eggnog into punch bowl and serve, sprinkling each glass with a bit more nutmeg.

This recipe comes to us from Elizabeth’s on 37th, in Savannah, Georgia, and was reprinted in this month’s Imbibe Magazine. It’s very different from my usual eggnog recipe, but even better. This one very well may become my new holiday tradition. However good my other one is, the brandies in this one add a level of flavor that just isn’t present in the old one.

According to Imbibe, this recipe will keep in the refrigerator for up to two months, mentioning that the extra time will allow the flavors to marry. In my experience, though, it’s best fresh. After spending the night in the refrigerator, the fluffiness from the egg whites is lost and you’re left with an entirely liquid drink. But don’t get me wrong, it’s still very good, just not quite the same.

Eggnog is great for experimentation. Try using a spiced rum in place of the dark rum in this one, or dropping a bit of Angostura bitters on top of your glass. Pair it with shortbread cookies or gingerbread.