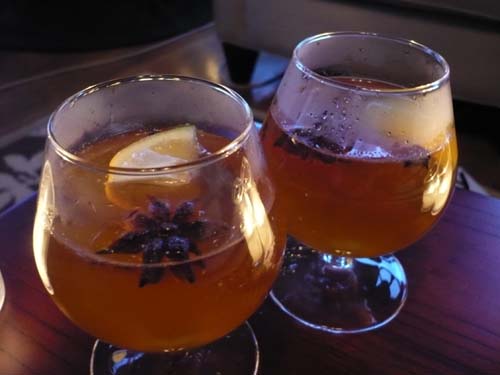 Combine the cloves, cinnamon stick, star anise, and honey in a heat-proof snifter. Top with the boiling water and stir to melt the honey. Add brandy. Squeeze in the lemon wedge and drop it into the snifter.

This is a fancier version of the classic hot toddy, which traditionally doesn’t include the cloves, cinnamon, or anise. Adding these extras and letting it steep for a few minutes produces a delicious smelling cocktail that tastes just as good. It’s a nice twist on an old favorite, especially on a cold day like today. It’s like hot tea, only better.

Have you ever tried a Hot Rum Toddy? Very nice.

Of course! I love hot toddys, but I prefer to make them with brandy or or applejack.