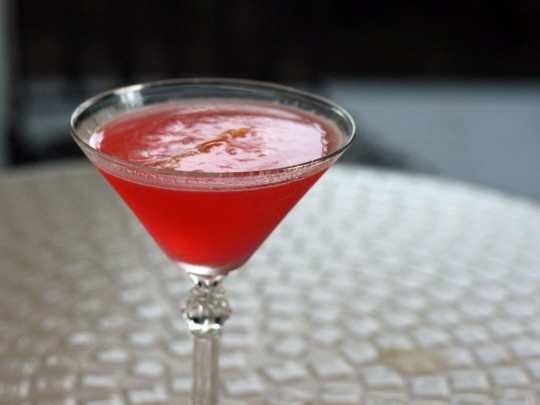 Combine ingredients in an ice-filled shaker and shake until cold. Strain into a chilled cocktail glass and garnish with a lemon zest.

Robert “Drinkboy” Hess says that the presence of gin in this drink will turn a lot of people off, but I would think that the Campari would be a far bigger problem for those who aren’t used to it. Here I’m using Drinkboy’s own adaptation of this recipe, which increases the amount of both Cointreau and Campari, while reducing the lemon. I personally think this balances the drink a bit more nicely, while allowing the Campari to come through (it’s a bit muted in the original). The combination of the Campari and lemon in these proportions give the Jasmine an almost grapefruit-like flavor, despite there not being any grapefruit in the drink.

The Campari is certainly more likely to put me off than the gin. That said, the rest of the recipe sounds appealing enough that maybe the next time I feel the urge to check if I still don’t like Campari, this’ll be what I try ;-)

My girlfriend really loves the Jasmine. I think is the Campari / Cointreau mix who makes it so irresistable.