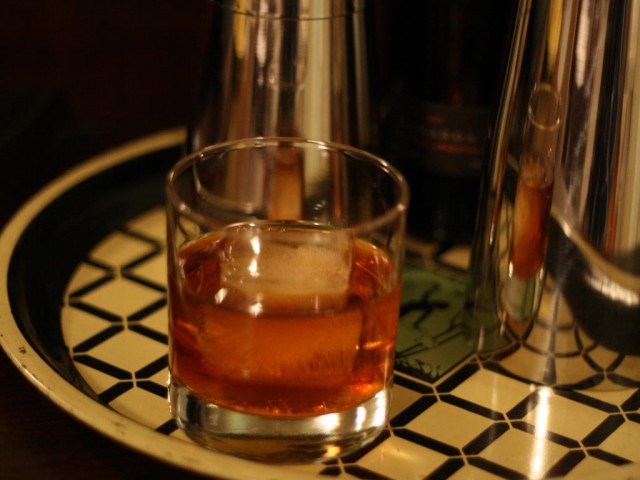 Combine maple syrup, cinnamon syrup, and bitters in the bottom of an Old Fashioned glass and stir to mix. Fill glass with ice and add bourbon. Stir until cold. No garnish.

This recipe was inspired by the Deliverance cocktail served by my neighborhood bar, Night Light. The Deliverance is made with maple syrup and bourbon, I don’t know in what quantities, and garnished with a cinnamon stick. While the Deliverance is a good drink, it tends to be a little on the sweet side.

While experimenting with variants at home, I hit upon this combination that I think works much better. The cinnamon is more pronounced in my version, but not so much that the maple is overwhelmed. We’re using two sweetening agents here but the amounts are low enough that it’s still not a sweet drink, no more so than a well-made Old Fashioned. Your choice of whiskey will influence that a bit too, of course. I use Bulleit bourbon for these and it works very well.

1. BG Reynolds’ syrups were formerly sold under the brand Trader Tiki. The syrups are unchanged.

For a little extra something, try substituting 1/2 ounce of bonded applejack in place of part of the bourbon. Good stuff.

A new favorite! One of the few new drinks I’ve tried that made me go “wow” at first taste.

I mixed up a few of these for friends and it was a huge hit. Not having BG Reynolds on hand, I made my own with equal parts water, sugar, and cinnamon sticks. For the pièce de résistance, I prepared bacon curls as garnish. Twists of bacon on a toothpick first lightly fried then finished in the toaster oven.

Sub’ing AppleJack does add that extra something.