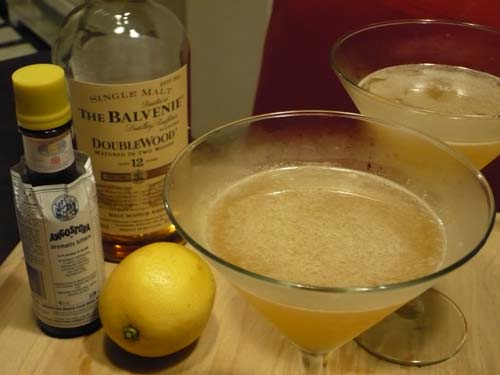 Shake all the ingredients with ice and strain into a chilled cocktail glass.

This drink was described by Mark Twain in a letter to his wife Olivia from London in January, 1874:

Livy my darling, I want you to be sure & remember to have, in the bathroom, when I arrive, a bottle of Scotch whisky, a lemon, some crushed sugar, & a bottle of Angostura bitters. Ever since I have been in London I have taken in a wine glass what is called a cock-tail (made with those ingredients) before breakfast, before dinner, & just before going to bed.

(quote from Mark and Livy: The Love Story of Mark Twain and the Woman Who Almost Tamed Him by Resa Willis)

Like the French 95, this is another cocktail that uses fresh lemon juice and simple syrup to achieve a nice balance between sweet and tart. The flavor of the Scotch is almost, but not quite, masked by the lemon. I think I’ll try increasing the Scotch to two ounces next time.

Recipe from The Craft of the Cocktail

I tried this once with Scotch and a second time with Bourbon. They were both quite good, but I’d recommend cutting back a little on the simple syrup if you substitute Bourbon.

That sounds like a drink called a Buster Brown, which uses these same ingredients but with bourbon instead of Scotch, and orange bitters instead of Angostura. I think the proportions are a little different. Maybe I’ll write that one up next.

I found the tangy/sweet flavor to be overpowering in this drink, tried both with bourbon and scotch. I decided to add more alcohol instead and it worked out perfectly. great drink.