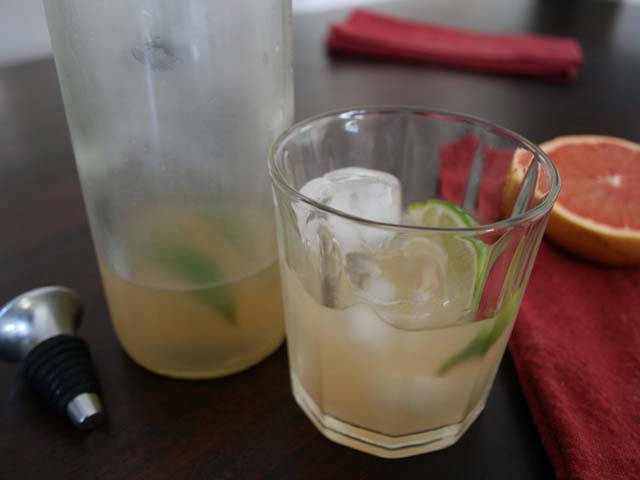 Combine all the liquid ingredients in an ice-filled cocktail shaker. Shake until cold, and then strain into a chilled cocktail glass. Garnish with a lime wedge.

We had some friends over for dinner over the weekend and I wanted to be able to serve some drinks as soon as they arrived. Serving wine is an easy way to do this but I wanted something a little more interesting. The weather was nice and I felt like something citrusy, and so decided on the Nevada. Mixing it up an hour before they were expected, I increased the quantities by eight, mixing it in a pitcher and then pouring it all into a clean, empty wine bottle to chill. I didn’t use ice in the pitcher because I didn’t want it to get too watered down, so I opted to serve them over ice instead of in the cocktail glass you might normally use.

If you like grapefruit juice, you’ll probably like this drink. I increased the amount of simple syrup a bit because it seemed a little too tart, but I’m not sure if that’s how the recipe itself is or a result of my making a much larger quantity. I find that I sometimes need to adjust the amounts a bit when making drinks in larger batches. In any case, the end result was a hit, even with the people who normally avoid drinking rum. And for those as interested in food as they are drinks, Sarai posted a few food pictures as well.

The Nevada cocktail first appeared in the 1941 book Here’s How, by W.C. Whitfield, which is probably the strangest cocktail book I’ve ever seen. I especially like the wood cover and metal hinges. They sure don’t make them like this anymore.