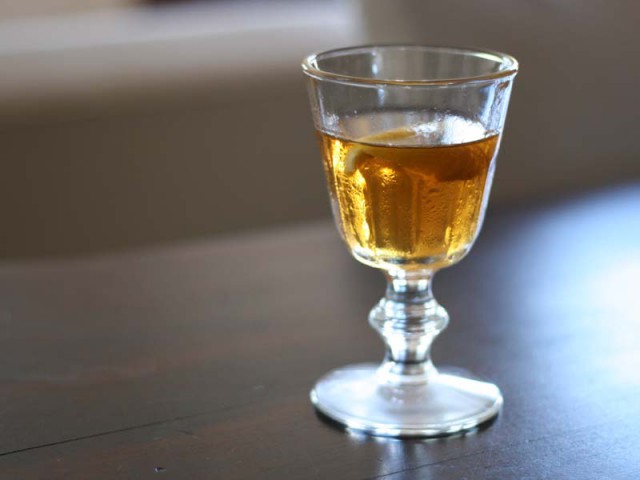 Fill an old-fashioned or cocktail glass with ice and top with water. In a second old-fashioned glass, combine the sugar and bitters and muddle to dissolve the sugar. Add the rye and gently stir to combine the flavors. Discard the ice and water from the first glass and coat it with Herbsaint, draining the excess. Strain the rye mixture into this glass. Rub the rim with the lemon peel and drop into the glass.

The Sazerac is an old classic, and considered by some to be the first important cocktail. It was first served in New Orleans around 1860. In the early days it was made with Cognac, later replaced by rye whiskey, and originally used absinthe rather than Herbsaint. It’s gone through a number of permutations since the 1800s but still has a very old-fashioned flavor about it (no pun intended, despite the similarity to the drink of that name). Try using Cognac and absinthe for a more original version.

The biggest surprise this version of the drink holds for the unfamiliar is that it’s sometimes served at room temperature rather than cold. The glass will be chilled but the cocktail itself is often not stirred with, or served over, ice. When nearly everything we drink these days is cold, this can be a little unexpected. Stir the rye and bitters mixture with ice before straining if you prefer it cold.

[…] we did classics. Starting out with the Waldorf, a rye-based Manhattan variant, and moving on to the Sazerac, which was first made around the 1860s. We wrapped up the month warming up with Irish […]