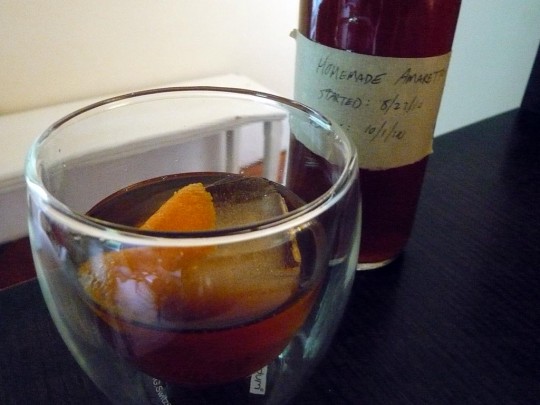 Stir ingredients together with ice in an old fashioned glass. Garnish with an orange zest.

The Sinister Proposal comes to us from Nick Hearin at Atlanta’s Restaurant Eugene, by way of the Sept/Oct 2010 issue of Imbibe Magazine, where it appeared alongside the recipe for the homemade amaretto the recipe calls for. Although I do occasionally enjoy amaretto in cocktails, I generally prefer it in cooking, but this issue of Imbibe arrived on a day that I just happened to have a few pounds of fresh peaches, so I thought I’d give it a try.

With a infusion time of five weeks, this peach amaretto is not something you whip up quickly. You start by collecting around 20 peach pits and toasting them, then adding cinnamon, cloves, sassafras, sugar, and a bit of water at various points over the next month, and finally letting it sit one more week before it’s ready. The resulting blend is sweet and mild, with a nice subtle spiciness. It’s an interesting recipe and worth trying if you’ve got the peaches. It would be interesting to try it with rum or bourbon instead of Cognac, and experimenting with other amari in place of the Cynar.

The amaretto I made was with almonds, but I have to imagine that peach pits would be heavenly.

I’m almost ready to filter and bottle the ratafia de noyau (using Matt Rowley’s recipe — he posted it in his Whiskey Forge blog) which uses peach pits. I refused to buy the crappy fake Creme de Noyau and all my attempts to get it from the French companies who make it have failed (plus, they distill their product after the infusion to get around that whole cyanide in the kernel issue, but that kills a lot of the flavor).