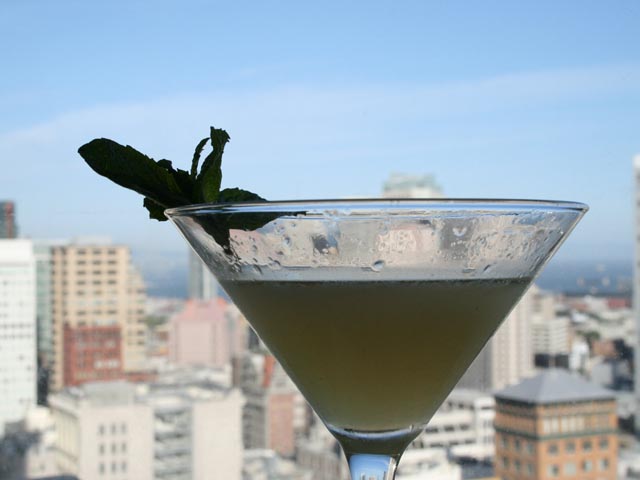 The Soiree was the official cocktail of San Francisco Cocktail Week this year. I just realized I never posted this, so here you are. Better late than never, right?

Combine ingredients in an ice-filled mixing glass and shake for 10 to 15 seconds, or until well chilled. Strain into a chilled cocktail glass. Garnish with a jalapeno slice.

It was unseasonably warm in San Francisco on the day of the Cocktail Week opening gala and by the time we arrived at the Starlight Room I was sorely in need of something cold. We read the recipe for this on one of the Cocktail Week flyers before we made it to the bar and were a little apprehensive. It sounded good, but not quite like the cool drink I had it mind, due to the chile tincture and jalapeno slice. We went ahead and ordered them anyway and were pleasantly surprised. Far from the heavy hot-pepper drink we imagined, the Soiree was actually quite refreshing.

The drink recipe above is only half the story. Those two dashes of cinnamon-chile tincture turn this from a drink you can whip up in your kitchen to something you have to really plan for. Here’s why:

Combine and allow flavors to steep for several days to taste. Strain and store.

So this probably isn’t something you’ll make at home unless you’ve got a party to plan for. This would be a good one to make a batch of for an outdoor summer party.