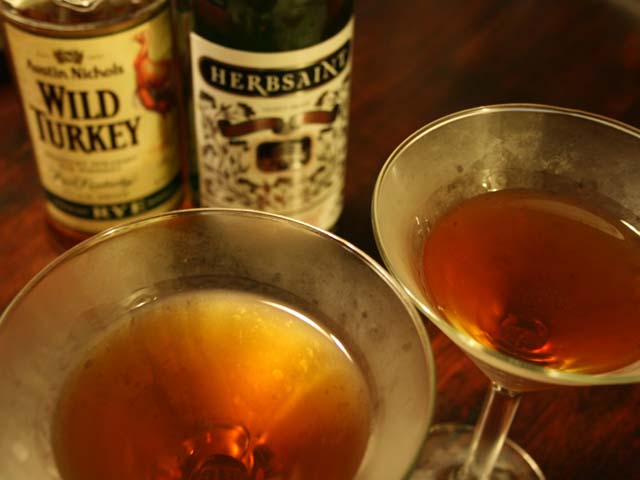 Pour the Ricard into the mixing glass, swirl to coat the inside of the glass, then discard. Add ice and the remaining ingredients, stir, and strain into a chilled cocktail glass.

Another relative of the Manhattan, the Waldorf cocktail appeared in in the now out of print Old Waldorf Bar Days and originally called for equal parts whiskey, vermouth, and absinthe. This version was modernized a bit for Dale DeGroff’s The Craft of the Cocktail, with an adjusted whiskey/vermouth ratio and with Ricard used in place of the absinthe, which is a little hard to come by in the US. I actually have absinthe on hand, brought back from Prague a couple years ago, but opted to make this drink with Herbsaint in place of the Ricard. I also used Wild Turkey rye instead of bourbon. The result was similar to a Manhattan but with just a hint of anise, making for an interesting alternative.

I realize I’m posting mainly bourbon recipes lately. I like to eat seasonally, and tend to drink similarly. Not much beats a good whiskey cocktail on a cold day

[…] month we did classics. Starting out with the Waldorf, a rye-based Manhattan variant, and moving on to the Sazerac, which was first made around the […]