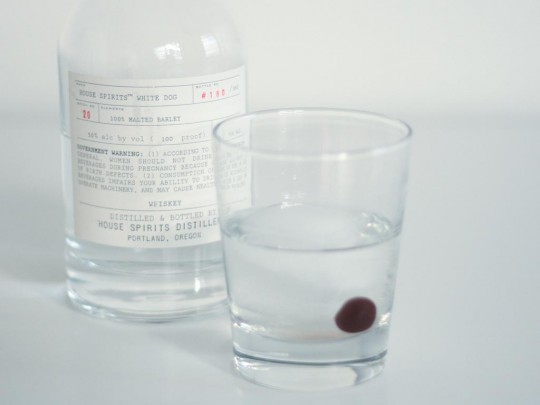 Combine the simple syrup and bitters in an empty mixing glass. Add a handful of ice, then the whiskey, and stir until cold. Strain into an old fashioned glass over a single large ice cube. Garnish with a brandied cherry.

I made an effort to preserve the crystal-clear appearance of this drink by using orange bitters instead of the aromatic bitters usually found in an Old Fashioned. While not perfectly clear, Angostura orange bitters impart less color than Regan’s orange. I also used simple syrup instead of the more common sugar cube in order to prevent undissolved grains in the drink. Finally, let your cherry drip-dry for a few seconds before dropping it in (although you can see a bit of color beginning to seep out of mine in this photo).

Key to this drink is unaged whiskey, aka “white dog”. Here I’m using unaged barley whiskey from House Spirits, but lots of other white whiskeys have come on the market in recent years so this is a great way to explore them.

A friend once referred to this as a “post-modern Old Fashioned”. I like that.

I want to go to there.