Monday night was the San Francisco Cocktail Week opening party at Harry Denton’s Starlight Room, at the top of the Sir Francis Drake hotel in Union Square. Sarai and I got there just as it was starting and hung out for a couple hours taking pictures and enjoying the cocktails. 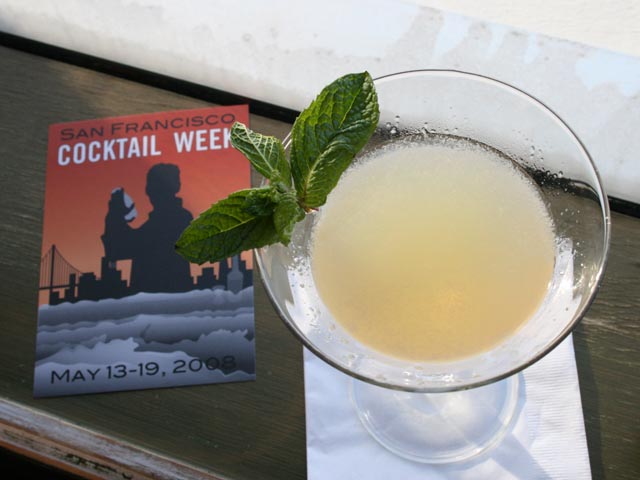 The signature drink this year is the Soirée, an interesting concoction made up of tequila, green chartreuse, elderflower liqueur, and more. I read the ingredients before I ordered one and was a little uncertain at first, but it was created in part by Jeff Hollinger, so I took that as a good sign and went ahead and ordered. I’m glad I did. It seemed like it might be a little much to start out with but it wasn’t heavy at all; it was actually light and quite fresh. Not bad. It’s a complicated drink, with a lot of prep required, so I don’t think I’ll be making these at home anytime soon, but it’s a fitting signature drink for an event like this. 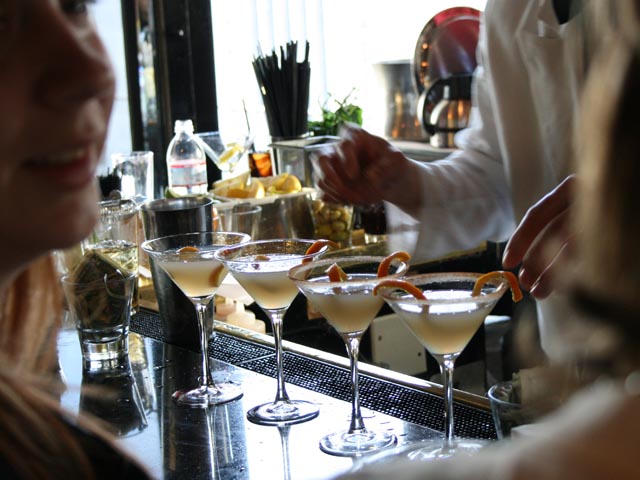 For our second round, we went with the Cable Car, created at this very bar by Tony Abou-Ganim in 1996. Tony himself was in attendance, having come out from Las Vegas for the occasion. The Cable Car is a variation of the classic Sidecar, but using spiced rum in place of brandy, and adding cinnamon to the sugared rim.

As I said, we arrived at the Starlight Room early, and I’m glad we did, as it filled up quickly. We got our first round of drinks fairly easily but by the time we were ready for our second, the crowds around the bars had grown nearly unmanageable, even with the second temporary bar set up. Our perseverance paid off however, and we walked away happy, even if they did run out of orange twists for our Cable Cars. Waiting around the bar also gave me a chance to get some good pictures of the action.

As it turns out, we weren’t able to make it to the Farmers’ Market Cocktails event Tuesday evening, but we’ll be at Elixir for Save the Sazerac tomorrow.