Located in the same building as Beaker & Flask, you enter Rum Club from the north side as opposed to the south, passing through a seated patio area before entering the bar. Like Beaker, the interior space is dominated by the bar, which in this case runs into the middle of the room with seating around three sides. Contrasting Beaker’s stainless steel and glass, Rum Club’s decor is dark and cozy, with grey painted walls, some great wallpaper, wood furnishings, and lots of sunlight toward the latter part of the day thanks to the west-facing windows that run along the top of one wall. Entering the bar on opening night last week, I immediately felt comfortable, as if I could spend hours here just sipping drinks and hanging out. 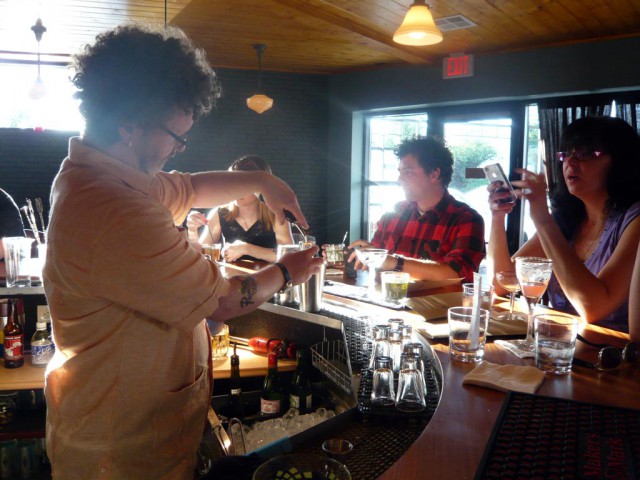 While Beaker & Flask is primarily a restaurant, the focus at Rum Club is clearly cocktails. The opening day menu was small, featuring just six items. Five were unusual enough that I wasn’t familiar with them and the sixth was a house variant of the classic Daiquiri which added maraschino, bitters, and a bit of absinthe. Notably absent was the Rum Club Old Fashioned which has graced the menu at Beaker & Flask, but I’m sure it’ll make an appearance as their cocktail list evolves. 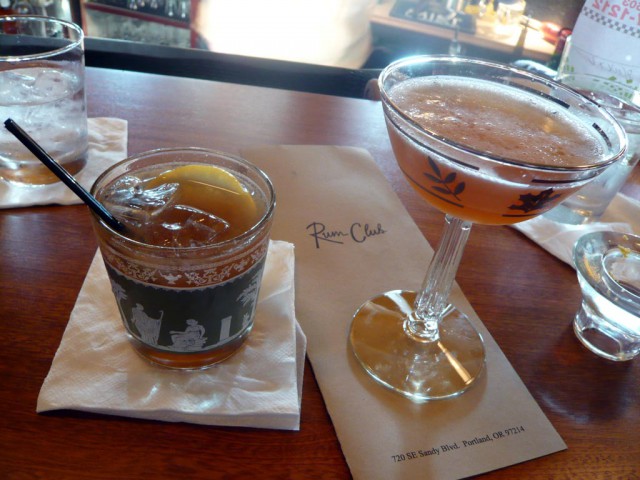 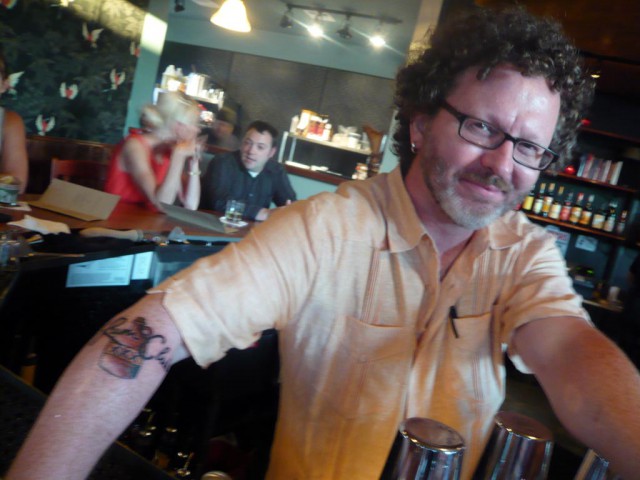 After my visit opening night, I mentioned on Twitter that I have a new favorite bar. That’s not an exaggeration; Rum Club immediately rose to one of the top spaces on my list and is sure to be one of the places I take out-of-town visitors when they want a taste of what the Portland cocktail scene has to offer.

Portland has always been a great city for cocktails but it’s getting even better lately, with a handful of new spots opening around town. The Bent Brick is one of these.

Opening just a couple weeks ago, The Bent Brick has quickly gotten a lot of positive attention for both their food and cocktail menus. The restaurant (or tavern, as they prefer) was opened by Park Kitchen alumnus Scott Dolich, and he brought along Adam Robinson, former bartender at Park Kitchen, to run the bar at Bent Brick. 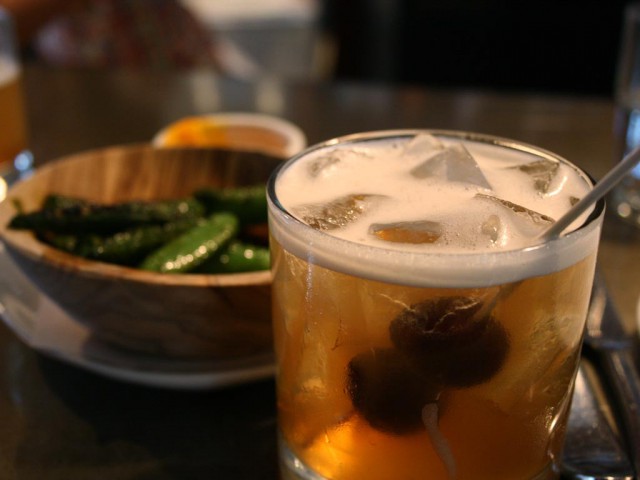 For our first round, we tried The Stranger and the Beginning of the End, which we paired with quinoa fritters and grilled snap peas. All were delicious. The Stranger, in particular, was really interesting, with an unusual mix of flavors that created a curiously layered drink.

The approach they’re taking is “hyper-local”, and that extends from the food to the bar, where Adam is focusing on local spirits and ingredients wherever possible, even going so far as to make his own replacements for some standard ingredients not produced locally. 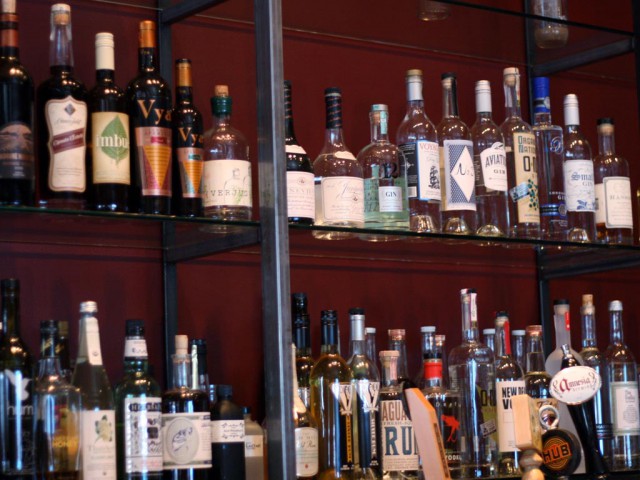 Our second round was the Drifting Along, made with Old Tom gin and pine, and the Rise to the Occasion. I had a little trouble deciding between the latter and the Slabtown Sour, which came with Adam’s recommendation. The Rise to the Occasion was very good but I know I have to go back for the sour soon. It was clearly a big seller; our seats at the bar allowed us to see just how many of those he was mixing up during our time there.

The Bent Brick is a bit out of the way, on NW 16th and Marshall, but the space is great. We were there on an uncharacteristically warm July day and loved that one side of the restaurant open could be opened to the outside air. They’re open 5:00–10:00pm Tuesday through Saturday, but I recommend visiting on a weekday if you can, as they fill up quickly. 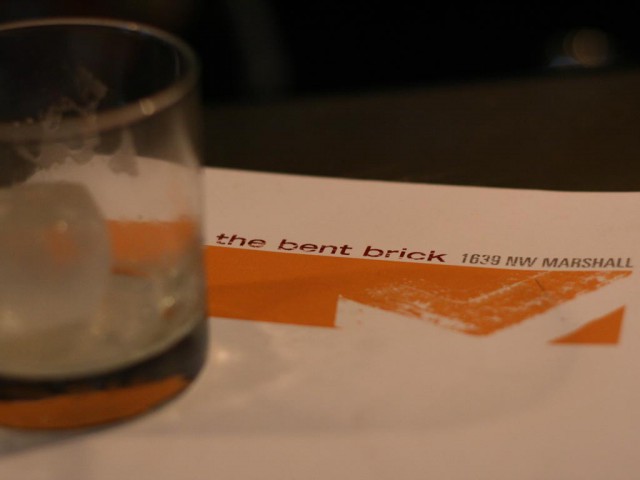 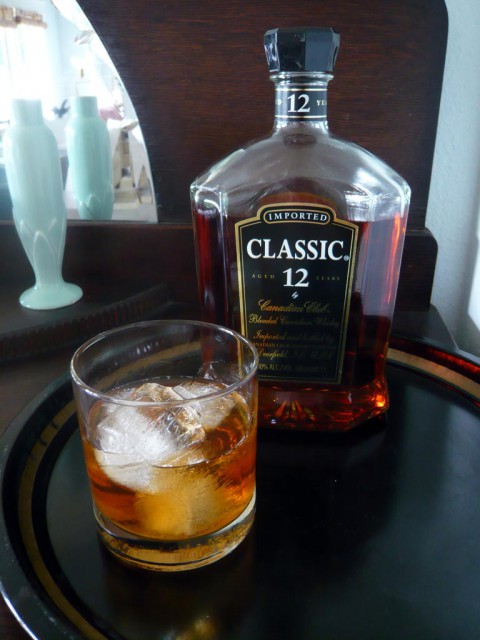 Canadian whisky can be pretty uninspiring but the CC Classic surprised me. The first things you smell are vanilla and spice and these flavors carry through to its taste, although drinking it neat also delivers a good bit of alcohol burn that threatens to overpower it. Drinking it on the rocks eliminates this problem as the addition of water smooths things out a bit. The vanilla/spice flavor is stronger here with the result that this whisky almost tastes like a rum.

So while it’s good on the rocks, I found it best in an Old Fashioned (big surprise for me, I know). It also mixes well, particularly with lemon, so it’s a good choice for whiskey sours.

Canadian Club Classic is also extremely affordable, with Hi Time Wine selling for only $16. If you’re in need of an inexpensive yet drinkable Canadian whisky, this one is a good bet.

1. I even tasted that bacon-flavored vodka one time after talking to the distiller and learning that no bacon is used in production. It’s actually vegan, if you can believe that. Regardless, I was not a fan. 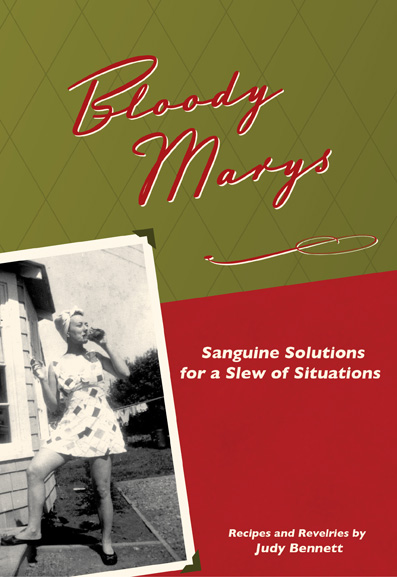 Portland author and Bloody Mary aficionado Judy Bennett has just released a new book that’s sure to help liven up your brunch parties: Bloody Marys: Sanguine Solutions for a Slew of Situations.

No matter what kind of day you’ve had or what kind of night you have planned, there’s a Bloody Mary to match your mood. From recipes to history to movies for any Bloody occasion, discover the culture behind the concoction. Dress your drink in pearls of knowledge and snark; there’s more to that toothpick than olives! And do it alongside the mothers of the masterpiece — the women of yesteryear who knew: the kiss of tomato on a clean, white apron means a good time is just around the corner.

With 45 recipes, vintage photography, and garnishes of wisdom, trivia, and legends, this book is a great addition to any well-rounded cocktail library. I mean really, who doesn’t love a Bloody Mary?

So to celebrate this book launch, Judy has generously donated a copy for a giveaway! Want this book for your collection? It can be yours! To enter, leave a comment on this post telling us your favorite and most creative Bloody Mary garnish. We’ll select a random winner on Thursday, July 14. This giveaway is open to everyone, in the US or worldwide.

Even if you don’t win, you can still pick up a copy on Amazon. And be sure to check out Judy’s blog for more Bloody Mary love.

Update: We have a winner!

I used the random number generator at random.org and it selected Lola, our first commenter, as the winner of the Bloody Mary book. She’ll be garnishing her Bloody Marys with caper berries.

Thanks for participating, everyone! 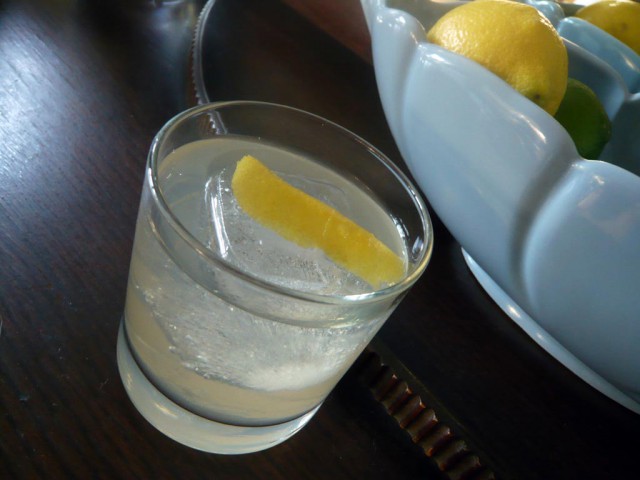 Pour aquavit over ice into a large old fashioned glass and top with Bitter Lemon soda. Squeeze your lemon zest over the top to extract the oils, rub it around the rim, and drop it into the glass.

Ok, this is basically a Gin & Tonic but I made an Aquavit Old Fashioned the other day with lemon bitters and zest and while musing on how well this spirit pairs with citrus, lemon in particular, I thought it would be fantastic with Fever Tree Bitter Lemon soda. Not your ordinary lemon-lime soda, Fever Tree Bitter Lemon is an all-natural, lightly sweetened, bitter lemon tonic that nicely compliments the flavors of the aged aquavit I’m using. While not branded as a tonic, this soda does contain quinine which lends its distinctive flavor to the drink.

The aquavit I’m using here is Gammel Krogstad, an aged aquavit from Portland’s own House Spirits Distillery. While aquavit might make you think of cold weather, given its Scandinavian origins, I’m finding it’s a nice change from gin on hot summer days.